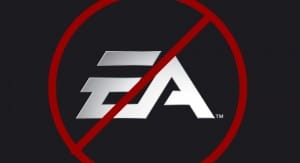 The Consumerist website has a yearly contest that is voted on by consumers on who they think is the worst company in the US. Many thought that some of the big banks or even online video companies would make the top spot this year but surprisingly, EA took it.

EA had this to say about their spot as reported by whatculture.com:

“We’re sure that bank presidents, oil, tobacco and weapons companies are all relieved they weren’t on the list this year, we’re going to continue making award-winning games and services played by more than 300 million people worldwide.”

It seems as though EA is not very pleased about this award, even the folks at whatculture.com thought the answer was a bit ironic:

“EA had a not so witty retort to the poll, showing it probably got under their skin a little which to me is a good thing.”

Now, since EA has 300 million customers worldwide, why would something like a contest conducted by a website that does not really have a huge following bother them? Obviously this got under their skin a bit but it seems to me that the response was a bit overblown. Perhaps if EA quit raising the prices of their games by so much each year and made them more affordable during the economic crunch, most consumers are feeling then they may not have reached the top spot.

What are your thoughts on EA? Do you think that they are the worst company in the US today?