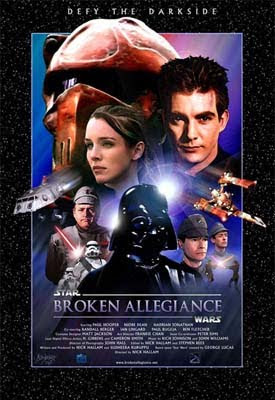 Broken Allegiance is a fan film that made its debut on the internet in April 2002, created by Australian fans of the Star Wars franchise. It is a live-action drama set in the Star Wars universe, taking place a few weeks between the events in A New Hope and The Empire Strikes Back. It tells the story of two Sith apprentices, Ruan and Calis, who have escaped the Empire by fleeing Coruscant in a stolen transport. They must fight for their freedom when Darth Vader sends the vicious bounty hunter Korbain Thor to track them down.

The film started pre-production in January 2001, and was shot both in studio and on locations around Melbourne in Victoria, Australia. Broken Allegiance cost approximately $5,000 AUD to make, mostly spent on raw materials for sets, props, costumes, catering and equipment rental to make the film. The film was made entirely with volunteer cast and crew.

In a departure from most fanfilms, Broken Allegiance features an original symphonic score by composer Rich Johnson, which was performed by the Johnson Film Orchestra.

Upon release, the film garnered major media coverage and was screened at numerous local and international film festivals to great response. Since its release, the film has been downloaded worldwide in excess of 1 million times. A sequel project was announced in 2003, but was cancelled in 2005 when the director decided to pursue an original feature film concept.

The film won the Audience Favorite Award in the 2003 I-CON Film Festival, and was a finalist in the 2002 Australian Effects and Animation Awards.

A Word from the Director
One of my very first memories is of my parents taking me to see Star Wars as a four year old. I was overwhelmed by the experience and so thrilled by George Lucas’s ground breaking film that from that very moment, I knew I wanted to be a film maker.

I began with Super 8 at the age of nine, and eventually moved into video. Every school holidays I’d be out somewhere shooting my latest blockbuster with friends, usually ending with a lounge room premiere.

After high school I studied filmmaking and media for a few years. Bit by bit I began to learn the craft, always dreaming of one day directing my first feature film as I slogged it out on student short films in every crew role going.

For the past ten years I have worked professionally in the film and TV industry in various production roles, from sound and camera to producing and directing independent documentaries and shorts.

Broken Allegiance, based around the Star Wars universe, is my most ambitious project to date. As producer and director, it involved over a year and a half of around-the-clock planning to produce a work that is ultimately a homage to the films that inspired me all those years ago to pick up a camera.

Working with a dedicated cast and crew, it has been our aim to produce a quality fan film, not only with stunning visuals but also substance to its story and characters.

I hope you enjoy the film!

Here is a short teaser for next weeks movie: