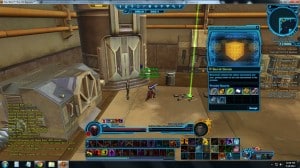 David Hunt answers a ton of questions, regarding the new agument system, in a recent forum post. Personally I really like that I can R/E green items for the augment kit pieces.

to summarize the important stuff:

Now to find the cheapest one to do and stock up on mats. Check out the full Q and A at the official forums, or below if you don’t want to go to the forums

Can these augment kits be used on ANY item, or are they restricted to player-crafted items ?

Will all grades of crafted items (green, blue and purple) yield augment kit components when RE’ed ?

Great to see that the augment kits are level-tiered. Will that be tiers 1 to 6 (similar to the crew skill level tiers) ?

When you say that the drop rate is not random, and “currently it’s set to 10”, does that mean we get the same amount of augment components, regardless of which item is RE’ed ? So you can RE either 10 bracers or 10 chest pieces and still only have enough components to make 1 augment kit ?

Yes. This is how the RE system functions in this scenario. There’s a chance we may explore something scaled by different item types in the future, but it is not currently possible for the augment component.

This is the one I really want some more information on. Exactly how does the tier system work?

So for your level 10 item, if you know you will use it until 50, then you should apply the highest level kit and replace the augment as you level. If you use a lower tier kit and reach a point where you want to place augments higher than the kit originally used on the item, you will need to upgrade the augment slot using a new kit.

Does this adequately cover the questions about how the tiers function?

But how much will it cost credits wise?

Which items/slots will these augment kits work for ?

All items. Head/chest/legs/hands/feet/waist/wrist/implant/earpiece/mainhand/offhand/relic/droid slots. And if I missed something, that too

It’s 44k per enhancement/mod/armoring to pull out ilvl 61s. That’s 132k per piece. Moving all my stuff to crit crafted variants was very expensive.

So, lets talk specifics. Lets say, I’ve made the orange, lev 400 blaster – Two Finger’s Revenge. It took me some durasteel / zal alloy, along with 10 blue mats from lev 49-50 missions, and 3 lev 7 exotic crafting mats – biometric cell.Of course, it was not critical hit, so no augments. To get the augment slot, I need to RE 10 items. But, the question is, any lev 400 armstech weapon be sufficient, or do I need to craft 10x orange lev 400 weapons, to get an augment hit.

If it’s the latter case, then the crafting system will be pointless, becasue, if I make 10 orange blasters, there is a nice change, especially with armstech crit companion, that I’ll get augmented weapon before I get an augment.

You need to craft 10x equippable items from any skill in the same augment tier. In this case, that means any level 400 armstech weapon should suffice. In future tiers, it may be difficult to find cheap recipes. With the introduction of augment tables, all existing level 49+ gear is in the MK-6 augment category. At some point we’ll introduce new augments levels that require MK-7, and at that time there probably won’t be as large of a selection of items to RE to get them. As we introduce more items and tiers, the density of items you can RE to get MK-7 will increase, and MK-8 will eventually appear and continue along that cadence.

As one of those players who has a char running around in bikini costume,since i ws able to get it from the social vendor,as far as i can tell I will NOT be able to augment it.:-(

This is not correct. You will be able to augment it. This specific outfit is also set to adaptive weight in 1.3.

-“Our goal with the modification system has always been to allow players to use any gear they choose and have it function at maximum statistical efficiency.””
-“For items made after 1.3, the crit augment slot matches the level of the item. That means that lower level items won’t get as much inherent value from crits as higher level items.”-“Q: So, that means if I craft a level 39 custom piece and it crits, its augment slot will only be able to accept augments up to whatever tier corresponds with that item level?”
-“Correct”

Am I missing something here? So much for any gear having maximum statistical efficiency.

Augment slots can be upgraded. It’s substantially more valuable to crit a level 50 crafted orange because it gets the high tier augment, and you’re spending the higher tier materials on that item. Crit crafting lower level items does not provide as much of a bonus, because you’ll want to upgrade the slot if you use it at higher level. It’s also cheap to create the lower level items.

In my opinion they already did this, when 1.2 hit, Augmented Orange was a hot ticket item……and notice how the augments went from having just 1 Primary stat to a lowered amount of that stat plus endurance? The balance was right there, they knew augments would be a long term and widespread gear goal for all players, thus they lowered the amount of the primary stat (Strength, Willpower, Power, Crit, Endurance) by 10 for all augments and added the 11 endurance.

Augment stat distribution was indeed changed with the long-term expectation of gradually making them part of your expected power level.

In this interview they say, that any 49+ crit crafted item comes with a MK-6 slot (“Augmentation Slot MK-6 49+”), but the level 49 augments need a MK-7 slot. So apparently you need a MK-7 augment kit in ANY case. That would make crit crafting completely useless…

Sorry for the confusion – this is a timing issue. When I responded to the first questions in the interview, augments went up to MK-7 and that was included in the screenshot. By the time the follow-up was complete augments had changed to end at MK-6, and thus that’s reflected in the table. I didn’t notice until after the interview was live, so the screenshot is dated. Augments range from MK-1 to MK-6, the 22 augments require MK-6, and the highest crafted items get an MK-6 augment slot.

I think they did say in one of those articles that (currently) the price for adding a lvl 50 augment slot is 50k. I believe they also said in the same article that they were, in fact, reducing the cost of extracting mods.

Although it can be derived from one of my answers above: the reduction to extraction costs is 30%. Extraction and augment costs will be continue to be evaluated based on the economic data we get from 1.3.