SWTOR will have choreographed combat… at least sometimes. But just what exactly this entails has many gamers confused. Can attacks be parried by moving out of the way? Is the combat already sequenced with the viewing of the “scene” shown once a character is already determined dead? 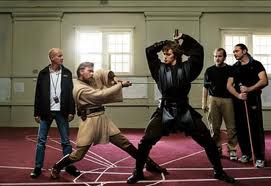 Georg Zoeller attempts to clear up some confusion about this on the forums:

“Ability. These kinds of abilities have multiple segments, each of which can hit or miss (which may give the target a window to escape…). That said, some of these abilities can be upgraded to root or stun, or the player can use other abilities before hand to set up the kill and make sure the target is not going anywhere.

The whole system is rather complex and we’ve spend significant amounts of resources and time to balance visuals and gameplay – we don’t want to lock the player in place or stop them from moving, but we do want the choreographed combat / blaster bolt deflection / over the top abilities. Naturally, there are situations where we have to trade off the visuals for the player’s ability to act smoothly and freely – but most of the time, there’s ways to make both work that play well – at least our testers are pretty positive about it so far.

No other MMO has done something like this, so I can understand it’s confusing / hard to understand.”

Does this mean that players will have more control over attacks and combat that your typical MMO? What will choreographed scenes mean to the player?