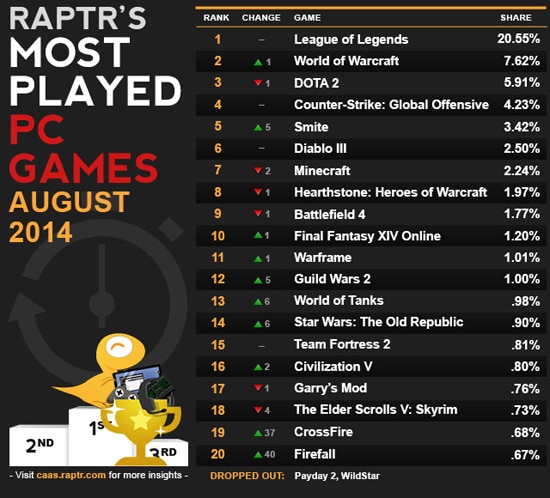 The latest expansion of Star Wars The Old Republic (SWToR) seems to be paying dividends for Bioware. The recent content release called Galactic Strongholds, pushed the Star Wars themed MMO to the 14th spot in game rankings for the month of August according to Raptr. Other notable MMO appearances in the list include World Of Warcraft (no.2), Guild Wars 2 (no.12) and Final Fantasy XIV (no.1o). It’s worth noting that WildStar dropped off the list for the first time.

Raptor’s most played PC games for the month of August

Considering the bumpy path SWToR had shortly after its launch this is certainly great news. The inclusion of housing in the game is certainly driving people back to the game and  guild conquest events are increasing activity. Bioware has promised at least one more major content release before the end of the year, so things are definitely looking good for the Austin-based developer.

Raptr is a social networking website and messenger that’s specifically tailored towards gamers. It boasts 22 million active users and has been around since 2008.