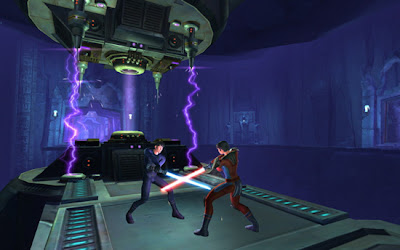 Which Side to pick?
On Wednesday my power went out. All day. And for someone on break ready to bust through another ten levels in borderlands, it is needless to say frustrating. So I ended up reading Deceived by Paul Kemp. It had been sitting on my shelf for a while and I decided to stop ignoring it and read. I’m not going to give you a synopsis, but it is a good read. But what really caught my attention of the story was the side of the Sith that had not been explored before. Compassion.

So being a long time wow player I always love the one question. “Which faction should I play?” To many coming into the game The Horde seem like the bad guys with their undead, magic addicts and monstrous races. While The Alliance seems to be prim and proper with the usual fantasy races with Elves, Dwarves and Humans. But depending on who you talk to it’s hard to make out who actually is the bad guy.

So with The Old Republic, we have the Galactic Republic, and The Sith Empire. As the movies, and games have taught us, the Sith are not nice people. They kill, murder, enslave, and most of all do what they want. So to many the appeal of the Sith doing whatever they want and killing to solve a lot of their problems can be very attractive to a certain group of players. But after reading Deceived, and looking at a lot of the lore behind the Sith it’s very interesting to see things from their point of view. It’s not about being bad, but about letting your emotions be free with the Force.

Many of the Sith have turned to the dark side out of love, others not approving of the Jedi way of purging one of all emotions, while others simply fight to protect who they love. So are they bad? When picking a faction it’s important. Who will your friend’s play as? What classes are there? What races are available? What cities will you have access to? What about the planets? And overall what will you be doing?

Questing for factions is very different. While you will still have the average go fetch this, or go kill that. But your content will differ. Do I want to search for rare artifacts of Sith power? Or do I want to attempt to keep the peace between two warring tribes? While people will tell you it’s all the same game, the questing, classes, and races do make a difference to a lot of people.

So before you just choose that cool force lighting and want to kill everyone you meet, think about both sides. Do you want calm in everything you do? Or will your emotions guide you? Personally I will be playing for the Galactic Republic. Why? I simply like their planets more. Also I have fond memories of Knights of the Old Republic with and putting smugglers with Jedi stuns. Though the Jawa companion is pretty damn cute.

PS: It took a lot of will power to not make the title into a Rebecca Black joke.