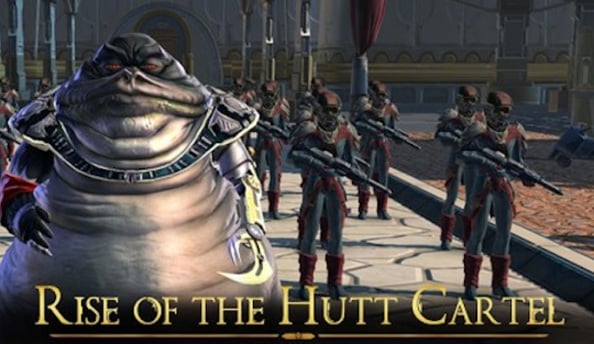 BioWare posted some great news last night. From tomorrow, all active Subscribers will receive the first Digital Expansion: Rise of the Hutt Cartel free of charge as a newly added benefit to the Subscriber Rewards Program!

This is awesome stuff, as it 1) encourages subs (because yay free expansion), it is an arguably considerable reward to those already subbed and don’t have the expansion. Still the butt hurt on the official forum is comical, all the early subscribers want coins too, but don’t realize they’ve gotten 5 months of expanded content and are not getting compensated because Bioware hasn’t developed time travel yet. Anyways. Check out the full story below:

Beginning September 12, 2013, active Subscribers will receive the first Digital Expansion: Rise of the Hutt Cartel free of charge as a newly added benefit to the Subscriber Rewards Program! Rise of the Hutt Cartel offers the breathtaking planet of Makeb, five new levels of story-driven missions increasing the level cap to 55, and exciting technology devices which unlock valuable rewards.

Additionally, players who have already purchased Rise of the Hutt Cartel and are an active Subscriber on September 12 at 4:00AM PDT / 11:00AM GMT will receive a new title, “The Risen,” via in-game mail on or before September 25, 2013 as our appreciation for the purchase.

Why free RotHC toe the people you ask? Well.. There may be something coming that requires 55+ content that they want to make sure at least all subs have access to and this is an easy way to do it. Maby BioWare have 2 expansions in the pipeline. Rather than have to purchase several incremental expansions to be current (as in other games), there is only one “active” expansion, and the rest becomes a subscriber benefit. Watch for RotHC to become part of the f2p/preferred benefit when this happens to xpac2 goes f2sub and xpac3 is available for pre-order.
This will mark the first time since the game went f2p that there was content available to a subscriber that isn’t available to f2p. The intended effect, as always, is to drive subscriptions.