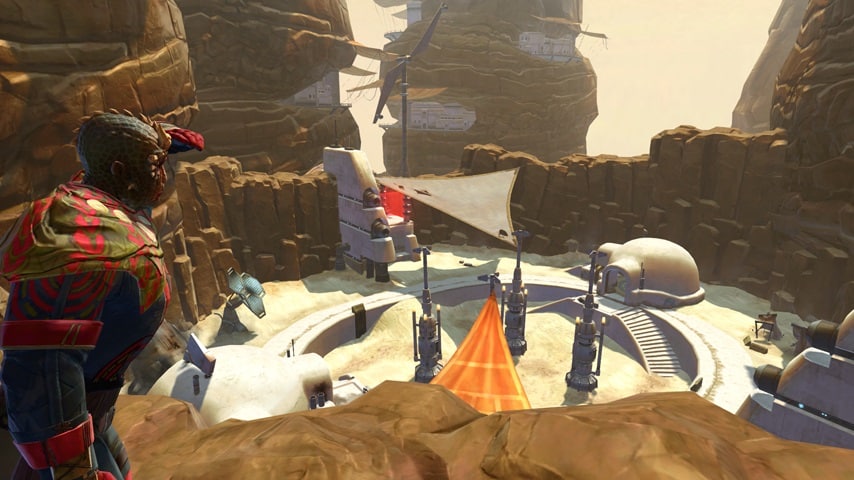 BioWare’s HoloNet News psoted the the conclusion of “an exclusive interview” with legendary Huttball host Baron Deathmark Yesterday. If you don’t know who Baron Deathmark is, he is the guy that commentates all the Huttball games. With the upcoming  gameupdate 2.4, mr. Deathmark will become extra busy, as he will be announcing all Arena games.

In part one posted a few weeks ago, Deathmark reflected on his storied career, hinted at future plans. In part two, Deathmark  take a look at the new Warzone Arenas. Read it all here, or check out our snippet below.

LAMALLA RANN: Baron, what can you tell me about the so-called “Arenas of Death”? What makes them stand out from Huttball?

BARON DEATHMARK: I’m so glad you asked that, Lamalla! A lot of folks out there assume that all Giradda’s doing is taking the ball out of Huttball, and that just isn’t true. That would leave nothing but a bunch of Frog-Dogs and Rotworms running over goal lines, and who wants to watch that?!

LR: I’m guessing no one?

BD: No one. Exactly! No, what Giradda’s done here is remove nearly every last rule from the equation, so what you’re left with is a clash between two teams of four dedicated, merciless, tough-as-durasteel warriors duking it out until only one side’s left standing!