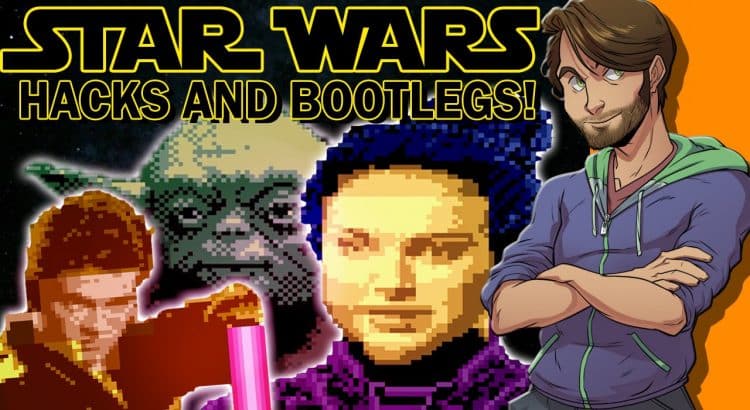 We’ve seen many Star Wars games: some good, some bad, some never released, but how about the hacks? YouTuber SpaceHamster gives us the rundown of some comically bad hacks bearing the Star Wars name.

Some of these hacks are low effort ventures: Escape from Hoth inserts a tiny, pixelated Millennium Falcon into the Atari game Asteroids, for instance. There’s also a hack that inserts the name of iconic Star Wars characters into the NES game Baseball Stars but is otherwise identical to the original game. Other hacks are hilarious for the scenarios they generate. A fine example is a Battle City hack that puts Luke in the Death Star with an assault rifle. Another is the Yoda Bros., a minimalist, one-level hack of Super Mario Bros. Some hacks don’t even pretend to make much sense. Star Wars: Jedy (yes, that’s how it’s actually spelled) hacks the Sega Genesis game Wolfchild and features an unnamed character (maybe Luke) with a fabulous mullet punching people on a flying battleship and occasionally shifting into a werewolf.

By far, the most bewildering of all is a Game Boy Color bootleg game that was only sold in China. It purports to tell the story of Episode II In the vein of a traditional hero-rescues-the-princess journey, similar to The Legend of Zelda. It even has Anakin using his lightsaber to battle enemies and collecting maps. He also collects objects that look like Chaos Emeralds, because this game might not be derivative enough. Worse still, Anakin’s movement is erratic, hit detection is dreadful, and there are so many leaps of faith that you may as well be playing over a sarlacc pit. It’s definitely worth a look, if only for a good laugh.

Watch the full video here, and see if you have the patience of a Jedi in playing some of these mind-bending games!