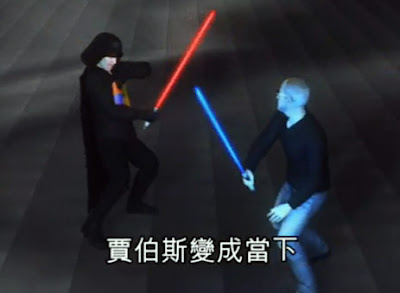 Apple founder Steve Jobs has been busy defending the iPhone 4, which has been mired in problems since before its launch. The latest scandal to crop up, dubbed “Antennagate,” is so-named because the phone’s antenna gets poor reception if the phone is held the wrong way.

Check out this awesome animation from NMANews explain Antennagate, while showing an epic lightsaber battle between Steve Jobs and Microsoft’s Bill Gates. Jobs also has some rather impressive Force lightning skills.

Translated:
Apple’s founder Jobs helped the company reach billions in revenue – thanks to the iPod & the iPhone’s success. (lightsabre scene) Apple seems to be even bigger than Microsoft right now, and Jobs is becoming a leader in cutting edge technology. But some say, the bigger Jobs gets, the more evil he becomes. (Force field appears) When Gizmondo got a hold of the iPhone 4 model, Jobs ordered the police to search Jason Chen’s residence, forcing him to return the model.
Recently there have been reports of worker mistreatment in an Apple factory. Some people feel that Apple’s treatment towards their workers is too cruel. (people falling off of buildings. A lot of consumers are complaining of the fact that iPhone requires a contract with At&t, and decides to sue Apple over the matter. The newest problem is with the new iPhone’s reception and dropped calls. But Jobs say that the problem resides not within Apple, but instead with the consumer’s hands, and says if the hand wasn’t touching the antenna, the problem would not persist. However after Consumer Report slams the iPhone in a review, Jobs holds a press conference to explain the recent problem. He admits that there is a problem with reception; however the said problem can be found in the other smartphones as well. If everyone is still unhappy about it, Apple will release covers for the antenna to mitigate the problem.