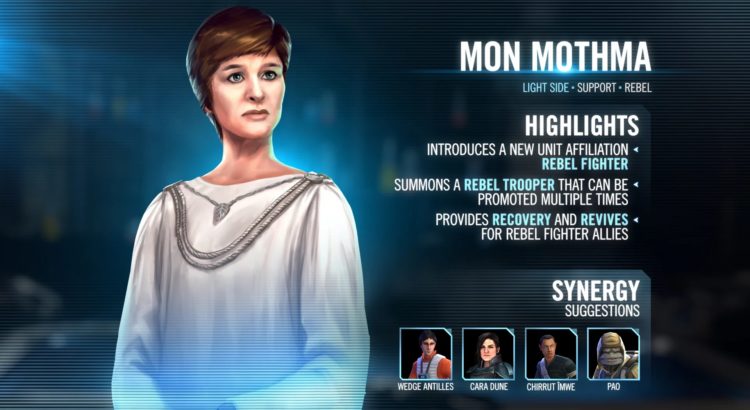 Mon Mothma, the Chancellor of the Alliance to Restore the Republic, is arriving on the Holotables! Mon Mothma’s leadership and fearlessness propelled her to the top of the Empire’s “Most Wanted” list and served as an inspiration to all members of the Rebellion. Ever mindful of the consequences of war, but always willing to stand for justice, Mon Mothma is a welcome addition to Rebel squads as she uses the Field Promotion ability to summon increasingly stronger Rebel units to battle.

Thankfully, many Bothans don’t have to die for you to add Mon Mothma to your band of Rebels. You can obtain this Rebel non-combatant leader by completing the new Marquee Event, The Alliance Chancellor!

FINAL TEXT: Revive a random Rebel Fighter ally with 40% Health and Protection. All Rebel allies have their current Health percentages equalized. Then, Rally Mon Mothma and all Rebel Fighter allies.

Rallied characters act based on their role:

If they were already a Rebel Officer, they are promoted to a Rebel Commander.

If they were already a Rebel Commander, dispel all debuffs on them, they recover 25% Health and Protection, and reduce the cooldowns of Mon Mothma and all Rebel Fighter allies by 1.

This ability can only be used if all allies are Rebel at the start of battle.

FINAL TEXT: At the start of battle, if Mon Mothma is in the Leader slot, she and all Rebel Fighter allies gain 8% of their combined base Max Health, Max Protection, Offense, Defense, Potency, and Tenacity.

Mon Mothma and Rebel Fighter allies have a 100% chance to assist each other whenever they use an ability during their turn, dealing 90% less damage (limit once per turn per ally). If that ability dealt no damage, the damage penalty is reduced to 45% less damage and that ally dispels all debuffs on the healthiest Rebel ally.

Unique 1: (ZETA) This Is Our Rebellion

If there are no other allied combatants at the start of a turn, Mon Mothma escapes from battle.

If this unit has been promoted to Officer or Commander, inflict Daze for 1 turn.

If this unit has been promoted to Commander, Rally all Rebel Fighter allies.

This ability can only be used if Rebel Trooper has been promoted to Officer or Commander.

If this unit has been promoted to Commander, these bonuses are tripled.