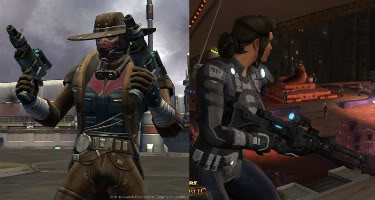 Rob Hinkle have been active on the forums, updating players about Engineering Sniper and Saboteur Gunslinger Changes, comming in game update 2.10 Here is a consolidated list from the forums:

Hey Gang,
Back from vacation and the first thing I see is a big mess I made before I left. I just wanted to hop in here really fast to make a comment on the Plasma Probe damage adjustment from testing versus the patch note. The short answer is: I screwed up the patch note and the 22% was from a previous iteration of changes that we were testing and decided we didn’t like. The values you guys are seeing on PTS is what our current target is, so let’s move forward with the discussion based on that number being the “real” number and talk about any further changes that might be requested without assuming there is a bug fix coming with a big damage increase.
Again, totally my fault and I didn’t catch the bad note before it went out to PTS.

Follow up note! Plasma Probe is going to keep its big snare that currently has on PTS and we will be updating the tool tip to clarify that bigger snare is intended. Just as an additional FYI (this was a change with the first PTS), the plasma probe snare reapplies every 1 second now versus every 3 seconds on live, so the snare “grabs” a player more quickly if they walk into it after the probe has been deployed.

Quote:
Originally Posted by Adovir
Hey rob I think it’s the feeling of everyone feels like the 3% isn’t really enough, especially with the change to the Inital plasma probe. A lot of players use the attack defensively in PVP and in PVE it doesn’t really change at all. I think that the 22% damage increase to plasma probe is very fair, the ability isn’t super powerful and it helps with the entire survivability and damage of the spec

—-
That’s totally fair, and possible. We want to see what kind of damage numbers our expert players are pulling out with the updated Explosive Probe (Live damage numbers with the 18s cooldown) that is hitting PTS soon (tomorrow, we hope) before we push PPs damage up further. Not saying we can’t or won’t, just that we want to see where things are now first.