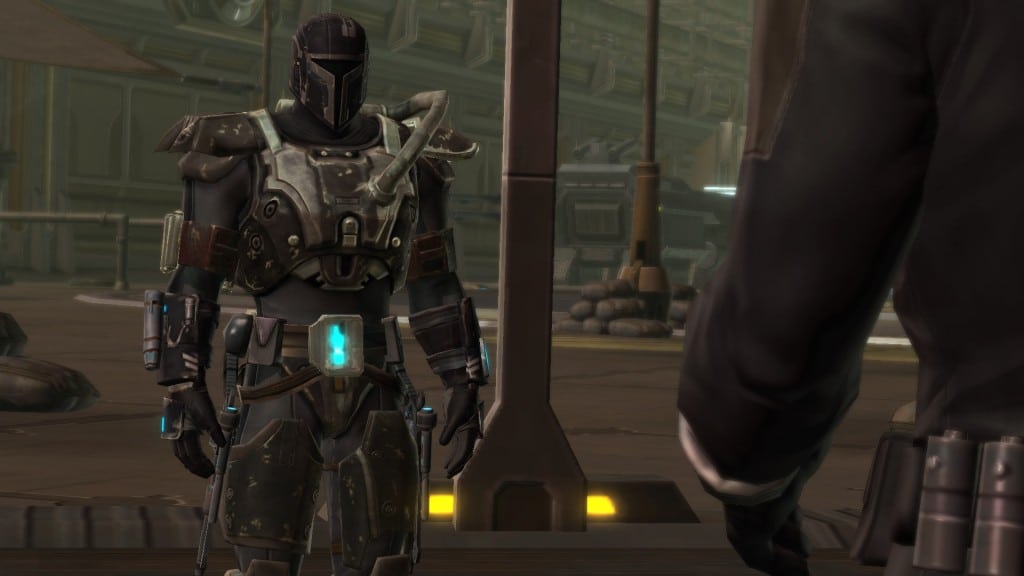 Eric Musco posted an update on the forums that Bounty hunters will like. Here is the summary of the post

Here are your top 3 questions, answered:

This question is plain and simple. Both specs for Powertech DPS are currently parsing on average 10-15% lower than the top classes in PvE and it is a general school of thought Sins and PTs are the worst PvE DPS. Many progression groups are not willing to take a powertech DPS because of their poor performance. What are the development team planning to do to address the lacklustre sustained damage in PvE?

Quote:
We agree that Powertech/Vanguard sustained damage output currently lags a bit behind some of the better damage dealers in the game right now. We do not currently have any finalized plans to discuss in this regard, but in a future update, we are hoping to increase the sustained damage output of Pyrotech/Assault Specialist Powertechs/Vanguards, likely by giving a boost to the specialization’s periodic damage. Our end goal here is to provide Powertechs/Vanguards with a specialization that can provide competitive sustained damage to their operation groups.

There are currently 3 tank classes in the game. Two of these classes have a large amount of crowd control whereas PT tanks do not. Over a 3 minute period a PT tank has a maximum of 19.5 seconds of stun/cc available (3 x 4 [electrodart], and 2.5 x 3 [carbonize]). On the other hand assassin tanks have 48 seconds of stun/cc available (8 x 3 [whirlwind], + 3 x 4 [electrocute], +2 x 6 [spike]). Juggs have a maximum of 45 seconds (3 x 3 [force choke] + 3 x 4 [back hand], + 3 x 6 [intimidating roar], + 3 x 2 (force push). To summarise, the other two tanking classes have well over double the controlling effects that PT tanks do (the root on grapple is easily countered by almost every class!). In arenas and competitive warzones a lot depends on CC of certain members of the opposing team and while PT have some good tools at their disposable, please do not forget that the other tanking classes have amazing tools as well! Are there any plans to address the obvious disparity in ability to apply controlling effects between the three classes by either removing some of their CC or adding some to the PT tank tree?

Quote:
Although “hard crowd control” (stun and incapacitate effects) is a large component of playing a tank in PvP, we do not believe it is the only deciding factor. Certainly your example highlights that Powertechs/Vanguards have less crowd control over time than their tank counterparts, yet we do not believe this directly correlates to their overall power in PvP. In order to help express why we have this philosophy we want to show you the current win rates for all tank specializations. This data has been gathered over thousands of Warzone Arena matches since the launch of Game Update 2.6 in both solo and group ranked queue.

If you look at the data you can see that the win rates of each tank are actually directly inverse to the amount of hard crowd control the class has. With this in mind we don’t necessarily believe that increasing or reducing a classes crowd control is the correct course of action to take at this time.

However, with that being said, we do have concerns about tanks in PvP. Players tend to feel that they are not as valuable as a pure DPS class or in some cases, even a hybrid tank/DPS. We are looking at ways to increase viability for all tanks in PvP. We don’t have specifics to announce at this moment but it is definitely something on our radar. In fact, this is definitely something we would love to see your feedback on. What could change, or be improved upon to increase desirability of pure tanks in PvP?

In both the Pyro Tree and the Shield Tech Tree, there are a number of talents that are negatively affected by certain stats. In Pyro, this is the Prototype Particle Accelerator talent, which has a 6 second cooldown that is thrown off by the 2% alacrity gained in the Rapid Venting talent, which makes it proc less often than intended and throwing off DPS, while in the Shield Spec Tree the talents Shield Vents, Hydraulic Shields and Heat Screen have their procs reduced by the defense chance, as they can only activate if an attack is shielded and a successful defense prevents the shielding roll from even happening. As higher defense values are typically considered better for tanks, and a bonus 6% defense comes from talents and the set bonus. Are there any plans to address these situations where gaining stats hurts the performance of Powertechs when its supposed to improve it?

Quote:
We generally agree that it does not feel right when things that are meant to make you better end up being more of a side-grade than an upgrade. For the Pyrotech/Assault Specialist, we can probably trade that 2% alacrity in Rapid Venting/Recharge for 2% ranged and tech critical chance in a future update.

For the Shield Tech/Specialist, we can probably reengineer it so that misses and resists will also trigger Shield Vents/Cycler and Hydraulic/Static Shield, but Heat/Power Screen already has another way to be triggered offensively in addition to triggering when an attack is shielded. So triggering Heat/Power Screen off of misses and resists might be taking this idea a bit too far – we will need to investigate it further before making a final call on that particular skill.

All of these changes could potentially come as early as the 2.8 update, but the community team will update you if that is not the case.