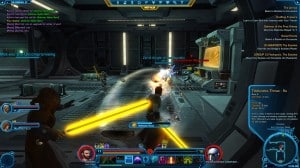 What the balance Sage lacks in glamour and color, it makes up for by being one of the deadliest DPS on the field when played correctly. The developers describe the Sage as a perfectly balanced class because you can contribute to the gameplay in a positive way no matter what type of situation you end up facing. This awesome class is hard to catch or kill and it’s very fun to play.

As a balance sage, you’ll need to use a combination of techniques when in a PVP setting in order to come out on top. This includes using snares and other forms of crowd control (CC) while kiting until your enemy stops in their tracks, which is when you’ll want to start nuking them. If your sage is being used as a healer, you should also use these techniques to help keep your opponents at bay while healing other players and yourself when needed.

Using the force as a balance sage will give you a great area interrupt that will not only stop casts but also unstealth enemies that may be lurking nearby. This will help you level the playing field, so you’ll have time to use your other techniques on your opponents.

Using your force wisely will take a little bit of practice so while you’re learning, keep in mind that spamming TK throw is a great idea when you’re low on force because it will allow your force to regenerate. You’ll build up your force faster than you spend it when you do this and you’ll be able to use some of your nukes after only two or three full throws.

TK Throw is an excellent snare to help keep a melee at range distance or stop a kiter from pulling away some of your team’s DPS but sometimes you should use this skill on casters as well or even a sniper if you happen to see them before your teammates do. This will force them to move from their position, which will give you and your teammates a break from the assault they’re dishing out. As a result, your team will have a better chance of winning.

Interrupt and crowd control will give your team a huge advantage so plan to use them often. With interrupts you can stop heals or big AOE attacks on your team. With CC, you can keep opposing players out of the way until there are more team members available to help you take care of them. Using interrupt at the right time can help give your team an advantage that could help you win the battle.

Using dots is important and something that you do want to take advantage of but don’t get carried away. Using too many dots can actually hinder your team. Teammates cannot CC players that you dot with “break on damage”. For example, if a smuggler throws out a flash bang, your dots will break them out of it so use them wisely and in moderation.

When playing the balance Sage, your position is important. You want to stay close enough to your team to have some cover from your enemy but you need to find a good position where you can nuke some of your opponents, too if you get a chance. The lower areas near the tunnels, around platforms and locations near LOS/cover are good places to be. Your goal is to find something to block the line of sight when you’re being targeted and this will make it easier for you to avoid focus fire.

One mistake that some new players make is chasing someone who is running away. This is a waste of energy and does not help your teammates at all. If you can kill them quickly when they first start to run that’s great but if they’re too far away don’t chase after them even if they did hit you pretty hard before they started to run. Instead, put your efforts on someone closer that will benefit your team. They’ll appreciate it!

Learn about the Other Classes

Learn all you can about the other classes so when you’re fighting them you’ll know what to expect and how to handle each situation. This information can help you decide what tactics to use to get the best results.

For example, if you see a few melee classes focusing in on you, try using a snare and begin kiting by running away from their direction. Your goal is to get the mob to chase you outside of their healers range so they can be killed easier by your teammates. Just make sure you stay out of their reach and don’t get killed yourself. If they realize what you’re trying to do and turn back, then you can stun and nuke them.

Players can dish out a moderate burst of damage output when needed but doing so will leave you lower in the DPS ranks. The way to do burst DPS is to use your project and mind crush abilities back to back. Mind crush is a move that’ll hit instantly and project has a slight delay when used at maximum range. If you use project first and then mind crush second, both of them can hit almost simultaneously creating a big burst.

When you use damage output efficiently in PvP you can climb to the top of the damage meter rather quickly. You’ll want to keep consistent damage flowing at all times unless you are kiting or crowd controlling. The easiest way to do this is to use TK Throw on a regular basis. You can stop channeling at any time and use a proc or even move out of the way and there is no cool down. This will allow you to do damage through most of your battle instead of spending time casting spell after spell with only minimal damage.

Understand Your Place in Battle

While getting a killing blow in a battle is a great feeling, it’s not one that you’ll experience often as a balance sage. Your job is to damage and weaken the enemy or create situations that send them fleeing in different directions. Once you have done your job, one of your teammates will usually make the killing blow.