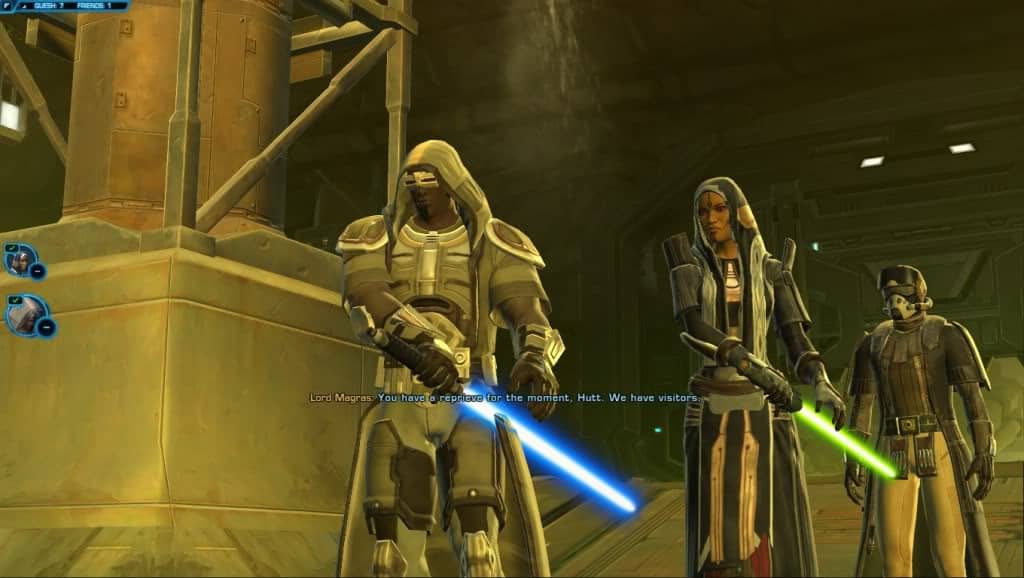 Eric Musco justed posted the answers to the top 3 Sage questions which were submitted earlier in the official forum. Questions 1 & 3 were a waste. More lightsaber attacks, really?
The answer to #1 was interesting to me at least, confirming that developers share my belief that dps should just, well.. dps and not try to actively off heal even yourself. Leave healing to your healers.
For #2, glad that they will be fixing pvp sage/sorc healing. It’s interesting that they are considering going back to how noble sacrifice/consumption worked in the early 1.x days when it didn’t cost any health to use.

Read it all below:

Are the developers satisfied with Sage/Sorcerer survivability, specifically in PvE operations? What is your philosophy towards the Sage class and its defenses? Are there any plans to improve the class’s current survival tools? For example, by perhaps providing a means with which to move our tools (Force Armor, Force Mend, etc.) off the GCD when cast on yourself?

Usually, damage dealt to the whole Operation group or to random Operation group members is dealt as elemental or internal damage, so that the classes with higher armor values do not have an advantage over classes with lower armor values, like the Sage/Sorcerer. Sometimes, the Operations team will intentionally decide to not make this damage elemental or internal (as is currently the case in the Dread Master Brontes encounter). If you feel that such practices leave the Sage/Sorcerer in a position that is too vulnerable, then please let us know in the Operations forum (linked above) so that we can address the issue.

Now with that said, we will definitely consider taking the global cooldown off of Force Mend/Unnatural Preservation, but the global cooldown on Force Armor/Static Barrier is there to stay, since it can be placed on others and we do not expect you to use the ability in Operations if you are a damage dealer.

Are the developers considering any changes to Seer spec to reduce the heavy reliance on casted abilities or to improve force management in a way that is not detrimental to survival? For example, improving Rejuvenate, reducing the lockout duration of Force Armor, or removing the health cost of Noble Sacrifice via set bonuses?

Sage/Sorcerer healers, we hear you and we see that our data validates what you are saying – as it shows you are currently performing behind both Scoundrel/Operative healers and Commando/Mercenary healers in PvP. We do not currently have any plans to share with you on how we intend to improve Sage/Sorcerer healing in PvP, but it is a priority for us, and we would love to hear your own ideas on how you would like Sage/Sorcerer healing to be improved in PvP without also making Sage/Sorcerer healing too good in PvE. We will say in advance that, “make such-and-such ability activate instantly,” is not a solution we are likely to consider (unless it is a temporary buff triggered by something else, and not a permanent reduction of activation time). Our goal is to keep Sage/Sorcerer healing as close as possible to the way it is in PvE, while improving how it performs in PvP.

Please let us know your thoughts about these issues in your replies to this post. We will be listening, and we appreciate your feedback.

Will the developer do anything to ameliorate these issues? Examples include allowing Willpower to affect melee attacks; providing additional worthwhile lightsaber attacks; and offering alternate animations via the Cartel Market or otherwise (Marketing take note!).

We could rather easily make Willpower affect melee attacks for Sages/Sorcerers, but we have no intention to make Sages/Sorcerers use their lightsabers more than they currently do. In terms of lore, the particular attributes that make someone a “Jedi Sage” or a “Sith Sorcerer” vary over the vast timeline of the Star Wars galaxy. And while Yoda and Palpatine were definitely inspirations for these classes, they are never identified by those terms in the films, and it wasn’t our intention to make direct gameplay clones of those characters in any case. Our feeling was that there are many players who want the experience of playing as a Jedi/Sith who relies almost solely on their mastery of the Force to resolve the challenges they face, with the lightsaber serving only as a secondary weapon; these classes were designed with that experience in mind.

As far as offering alternate animations and visual effects via the Cartel Market is concerned, only time will tell. Your message has been passed onto the team responsible for Cartel Market updates, and if it is possible, then you might see those options appear in the future.