RepublicTrooper.com has added Tim Bertram to their team. Tim is an aspiring author, with one completed novel already under his belt and he is writing a fan-fiction novel based on the Republic Trooper exclusively for their site!
The title of the novel is “Lost Tales of the Old Republic”””. They already have the first two chapters from him – over 20,000 words, and each Monday they will posting a new portion of the story.
The first portion of Chapter 1 can be found here.
It begins:
The entire craft shook so hard that you could hear the teeth of the assembled troopers chattering together, causing several of them to insert mouth guards as they finalized last minute preparations before decent. Staff Sergeant Jarrek Gageiz; Gage to his friends and fellow Non Commissioned Officers, and Staff Sergeant ‘G’ to his troopers held on tightly to a handhold along with several other NCO’s as the rest of the troopers were strapped into their seats.
“Corporal Rossik!” he yelled down the aisle towards the back of the craft. A young Corporal rushed up the aisle staggering as the shaking craft nearly took him off his feet.
“Yes Staff Sergean…” Rossik answered as he approached Gage, but was cut short.
Check out their site to read the rest. You won’t be disappointed. As a fellow writer, I loved it but I’m sure it’s something other SWTOR fans will enjoy as well. 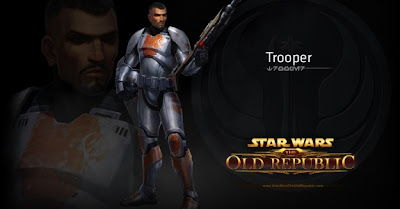