If your eager to know what is coming up in swtor, you should check this out! Includes a massive summary of the guild summit.

We will dive into the patch 1.2 and we will point out a list gathered.
and then we move over to the guild summit!

So, here is a list of things we’ll see in patch 1.2, this is taken from various Bioware releases through media.

New Warzone – Novare Coast
Ranked Warzones. Will use ELO ranking system for both solo and group play in ranked Warzones
Medal Rewards will be capped to try and prevent medal farming.
Entry Level PvP Gear for new level 50s to bridge the gear gap between new level 50s and people in
higher tier PvP gear.
Vote To Kick Players can vote for inactive players to be kicked from the match.
Same Faction Warzones. Targetted for the 1.2 or 1.3 update.
Ranked Warzone Commendations will allow for direct purchase of the new tier of PvP gear
Medals for Winning Matches Fast as opposed to dragging them out and trying to farm other medals.

Over to the guild summit! Here is a gigantic list for you!

– The new Operation, Explosive Conflict will be the hardest Operation
– Nigthmare mode will have a different loot (gear) post Update 1.2
– Normal mode wil be replaced by “Story Mode”, to allow casual players to enjoy the story
behind the Operations
– Character copy to PTS will be available soon
– New Flashpoint: Lost Island continues the Kaon story
– Game Update 1.3 will include a Group Finder (single server only)
– Game Update 1.2 will not come with any in-game combat log or any
metrics for that matter but a parsable log will be implemented per class actions (offline, probably disk dump)

– New Warzone: Novare Coast (same faction vs same faction gameplay). It’s an objective control type Warzone.
– Game Update 1.2 will bring Ranked PVP.
– Group queue will be available in 1.2 (up to 8 players)
– New PVP dailies in 1.2
– 18 new objective medals are going to be introduced in 1.2
– Winning the games faster is encouraged in 1.2
– Vote to Kick will be added in 1.2
– Players who afk in Warzones or don’t do anything (0 medals or objectives), won’t receive any rewards in 1.2
– New PVP gear (tier) in 1.2
– New PVP Crafting (expertise crystals)
– Voidstar and Civil War will have a training version which will allow same faction vs same faction battles
– Cross-server Warzone queues will be implemented in the future
– Warzone Tournaments will be introduced post Game Update 1.3
– Persistant groups through Warzones (the ability to keep the current group while queuing) will be
implemented with no ETA atm
– Ilum will be redesigned in the near future
– Minor changes to Outlaw’s Den (quicker travel route)
– Player bounties are planned in the future of SWTOR (no ETA)
– Warzone challenges are planned (challenging another guild/group directly)
– War Hero commendations will be available only via Ranked Warzones
(doesn’t require to have Valor Rank 70, it’s just named the same)
– The current focus of valor is not to get different gear,
it’s more of a prestigious thing but it will yield several items/things such as mounts, titles,
vanity pets etc.

– Family Tree type legacy
– Once you reach level 50 with a species, you can unlock that species to all classes
– Human species alts give you extra Presence
– Legacy Global Unlocks: – unlock class emotes
– Unlock other class buffs (ex. as a Bounty Hunter, with a Sith Warr alt, you can buff with both class buffs)
– Heroic Moment ability (not usable in Warzones/Ops etc)
– Unlock Heroic Abilities (ex. using Force Choke on your agent – again, not usable in Warzones/Ops
and usable only with an active companion)
– Complete all missions for a companion “type” (e.g. ranged tank)
unlocks a shorter cooldown for Heroic Moment, a small stat boost and additional Presence buff for
all your companions.

– Dance with your companions
– Brawling abilities for unarmed combat
– Purchasable Legacy Rewards
– Dark/Light/Neutral rewards
– New “Sprint” ability – short duration buff
– Ship training dummies and Warzones dummies will be available at 1.2 (testing damage etc)
– Ship repair droid that will repair your gear, which you can sell gear to and from you can buy
different items
– Ship mailbox
– Ship Neutral GTN (high legacy level only)
– Legacy Weapons and Armor
– Legacy appearances
– Unique orange items only unlockable by legacy levels.
– Multi spec is coming (a type of Dual spec but allows you to save multiple specs – more than 2)
– Voice restraining mod for the ship robot (aka mute)
– Ship droid gains affection

– 84% of players have less than 1 million credits and repair costs are currently seen to high.
The developers are working for balance adjustments to correct this situation
– Legacy upgrades for Crew Skills are coming in Game Update 1.2 such as better RE system,
crafting Operations gear with critical augment slots and more.
– Armstech and Armormech will be able to make different types of augments
– Slicing will supply augment materials
– Cybertech speeders will become BoE
– The costs of training a level 3 speeder will be reduced
– Shorter cooldowns for cybertech grenades
– New color crystals will become available for crafting through Artifice
– New schematics will be implemented, including for PvP crafting (gained by PvP-ing).
Artifice will be the first crew skill to benefit from this
– Overall, efforts are focused to motivate players to become crafters by offering them exclusive
benefits that will allow them faster credit gains, better looking gear and performance
– A tooltip will be implemented in Game Update 1.2 that will tell you if you can Reverse Engineer
an item and if there is a new schematic that you can learn by doing so
– High-level (purple) missions will no longer have a chance to fail starting with Game Update 1.2

– New possible features include character re-customization and chat bubbles
– Social, alignment and family tree unlocks will be available through the Legacy system
– In the future all cosmetic gear should work for all types (light, medium and heavy armor)
– Animal mounts will be implemented at some point in the future
– More role-play emotes will come and many of them will have lines.

– Guild banks will come in Game Update 1.2 (with up to 7 tabs that you can buy with a gradually
increasing price)
– Detailed guild logs will allow guild leaders to see all incoming/outgoing transactions

– Guild Emblem (useable on armor)
– Guild Calendar
– Guild Advertising (to support guild recruitment/joining)
– Guild Progression will be implemented, but not in the near future
– Guild Capital Ships design exists (will also not be available to soon)

– The “Unify to Chest” option is being brought back in Game Update 1.2 and it will be
toggle-able for each armor piece (default setting “off”)
– New daily quests on Corellia will be implemented in Game Update 1.2
– Dual-multi spec is coming in two stages: first you will be able to switch between tree builds;
in the second stage switching will also change the gear loadout (not in 1.2)
– Same gender romance will be implemented at some point (quote: “Sometime this year”)
with story updates included
– Warzone team balancing will be optimized through the improved match-making system and the incentives
provided to discourage warzone quitting
– The option to to turn down shader settings that is coming with Update 1.1.5 will make the game playable
on lower end machines. However, there is a dedicated team working constantly on optimizations to make the
game run better 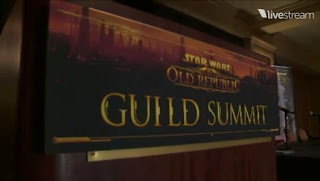