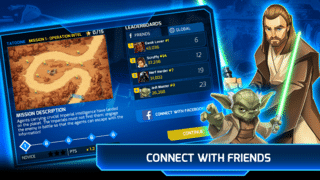 The acquisition of the Star Wars franchise by Disney recently, also brought us a number of different gaming announcements for PC, consoles and more lately mobile devices. The latest one is Star Wars: Galactic Defense by DeNA, a free-to-play tower defense game based on the Star Wars Universe. The game is now available for download for most mobile platforms and covers both original and prequel trilogies.

While tower defense games are not something new, I have to admit that most Star Wars games tend to get special attention because of that element. The inclusion of special characters from both trilogies definitely adds to the game and incorporates a special twist to a game genre that we have seen in many different forms.

You can get Star Wars Galactic defense from Apple Store, Google Play or Amazon Store.