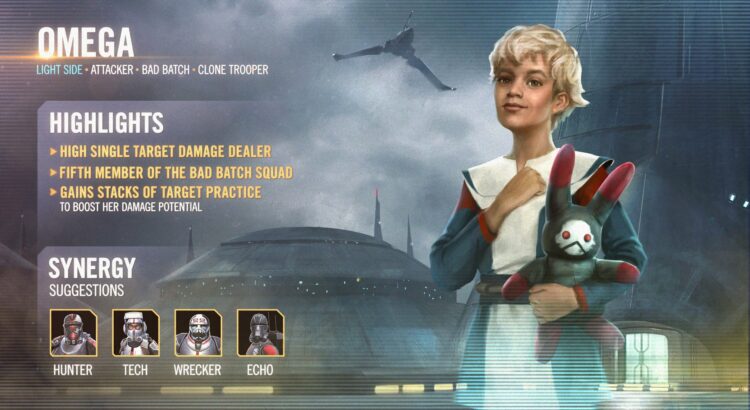 The guys over at Capital Games has posted a new developer insight. This time they are talking with the designers of Omega– the member of the bad batch.   Check i out.

UNIT NAME: Omega
ALIGNMENT: Light Side
CATEGORIES: Attacker, Bad Batch, Clone Trooper
Clever and empathetic attacker who utilizes buffs, debuffs, and the presence of her Bad Batch allies to take out her foes.

FINAL TEXT: Deal Physical damage to target enemy. If Omega has Evasion Up, inflict Blind and Daze for 1 turn.

If Omega has a buff that can be dispelled and it’s her turn, she deals damage again dealing 50% less damage.

(ZETA) Deal Physical damage and inflict target enemy with Zeroed In. Dispel Zeroed In from all other enemies and Omega gains a stack of Target Practice. These effects can’t be copied, dispelled, prevented, or resisted and last until the end of the encounter, Zeroed In is removed from an enemy, or Omega is defeated

If the target enemy is Exposed, this attack inflicts Target Lock for 2 turns and removes 10% Turn Meter.

Zeroed In: Omega has Target Practice while a character is afflicted by this; Omega can ignore Taunt to target this enemy

FINAL TEXT: Omega dispels all debuffs on herself and gains Stealth for 2 turns. Bad Batch allies gain Protection Up (40%) and Defense Penetration Up for 2 turns and 10% Turn Meter.

If Omega has Critical Chance Up, Bad Batch allies gain an additional 20% Turn Meter, and Protection Over Time (20%) for 2 turns.

If Omega already had Stealth and an enemy has Zeroed In, she gains a stack of Target Practice.

Unique: PART OF THE SQUAD

(ZETA) At the start of the encounter, if all allies are Bad Batch, whenever the allied leader begins their turn, Omega gains +5 Speed, and +2% Offense (stacking, maximum 50 Speed and 20% Offense) for the rest of the encounter.

Omega, the enhanced clone from Kamino, has made her way to the holotables to round out the Bad Batch faction. Her interest in Clone Force 99 eventually led to her joining the ragtag bunch…as well as her being the catalyst for an impromptu food fight. Although Omega often felt like a misfit, the Bad Batch embraced her and became the family she never had.

Under a Bad Batch lead, Omega gains Speed and Offense. When stealthed, she also assists Bad Batch allies when they use a Special ability. Her Special ability Adaptive Learner introduces a new buff and new status effect to the game, Target Practice and Zeroed In. The buff grants damage bonuses while the status effect allows her to ignore Taunt on enemies affected by Zeroed In. Omega can also inflict Blind and Daze on enemies with her Basic ability, Disarming Shot.

Omega is the piece of the puzzle the Bad Batch didn’t know they needed, but accepted wholeheartedly. On the holotables, she adds some high single-target damage output to an already fun faction. Play the new marquee event to unlock Omega and complete your Bad Batch squad.