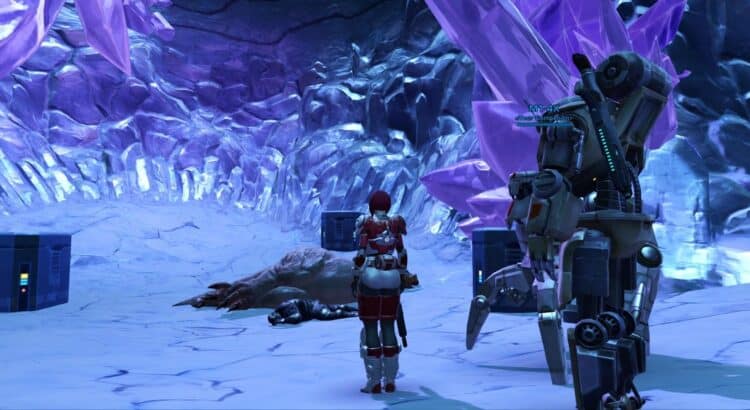 The Battle of Ilum, also known as the Flashpoint in Star Wars: The Old Republic (SWTOR), is a pivotal moment in the game’s story. It is a level 50 flashpoint that takes place on the ice-covered planet of Ilum, where the Galactic Republic and the Sith Empire are locked in a fierce struggle for control of the planet’s resources.

Ilum is a sacred place for the Jedi Order, as it is home to the Crystal Caves, which are the source of the crystals used to construct lightsabers. The planet is also rich in Adegan crystals, which are used in the construction of blasters and other high-tech equipment. As such, both sides are willing to go to great lengths to secure control of the planet.

The flashpoint begins with the player character (PC) being sent to Ilum by their respective faction to assist in the ongoing conflict. Upon arrival, the PC is immediately thrust into the thick of the battle, where they must fight their way through waves of enemy soldiers and powerful bosses.

One of the main objectives of the flashpoint is to capture the Republic’s Forward Outpost and the Empire’s Shadow Outpost, which are strategically located on opposite ends of the map. To do this, the PC must work with their allies to push back the enemy forces and secure control of the outposts.

As the PC progresses through the flashpoint, they will encounter a number of memorable characters, including the Republic’s General Garza and the Empire’s Darth Serevin. Both of these characters are central to the story of the flashpoint, and their actions have far-reaching consequences for the outcome of the battle.

In addition to the main objectives, the PC must also deal with a number of side missions and challenges, including defusing bombs, escorting allies, and defending key locations. These tasks add variety to the gameplay and help to keep the player engaged as they fight their way through the flashpoint.

As the PC nears the end of the flashpoint, they will be faced with the final boss: Darth Serevin. Serevin is a powerful Sith Lord who has been instrumental in the Empire’s efforts to secure control of Ilum. He is a formidable opponent, but with the help of the PC’s allies, he can be defeated, bringing the Battle of Ilum to a close.

The outcome of the Battle of Ilum has significant implications for the ongoing conflict between the Republic and the Empire. If the PC succeeds in helping their faction emerge victorious, it will be a major blow to their enemies and could potentially turn the tide of the war in their favor. However, if the PC fails, the consequences could be dire, with the losing faction potentially suffering major setbacks and losses.

In conclusion, the Battle of Ilum is a thrilling and important moment in the story of SWTOR. It is a challenging flashpoint that tests the skills and determination of the PC, and its outcome has far-reaching consequences for the ongoing conflict between the Republic and the Empire. Whether playing as a Jedi Knight or a Sith Warrior, the Battle of Ilum is an unforgettable experience that no fan of the game should miss.