Adegan crystals were commonly used by Jedi as a main component of a lightsaber. Also known as “Ilum crystals””. BioWare tells us How to Find a Magenta Adegan Crystal for yourself, if you can figure it out, that is.

You may need a bit of time, but not a crazy amount either. All classes are capable of obtaining it. Think of it as something like a datacron.

Of course you also need to find an Artifice capable crafter with the recipe to turn the raw crystal it into a Lightsaber crystal, but for the right price, I’m sure they’ll help you out.
Honestly, I was a bit amazed to find out that it is possible to have a mystery like this in an MMO. It’s been in the game for a few months now (since beta).

Why the mystery? Why not serve it on a platter to those who want the color?

Well, for the same reason there aren’t vendors at the start of the game with all the outfits, colors, colors, weapon appearances, etc. Because this is an RPG – some things are earned, not just handed to you on a silver platter. If you want them, you have to play the game.

Yes, we know character appearance is important for people. Hence many of the choices we made in the game, hence us adjusting many features based on feedback from the community during beta. However, the acquisition of appearance options is still a part of the game. You earn appearance past character creation, in various ways.

And, because I’m such a nice person today, I’ll throw in one hint to get you started:

And a Reddit poster attempts to simplify the process:

First Step – Tattooine: Click the base plate of any active Water Vaporator for a refresh buff (waterglass icon) — I found mine north of Mos Ila at (971, 473), but they are scattered about. Note: they seem to be on a fairly long cooldown.

Second Step – Travel to the top of the really tall mountain on Hoth (X-907,Y 637) – The closest speeder is at the Leth Outpost and the mountain is clearly visible from here. Your buff will disappear and you will get the “Pure Shockfrozen Water” item placed into your inventory.

Third Step – Take a couple of level 50 friends and go to the Depleted White Adegan Crystal node on Ilum; to the west (-553,-5) and click it. A Force Ghost will spawn from the frozen pool (boss level 50 mob). A crystal will then spawn for the group a few yards away from the depleted crystal. Loot this for the Magenta Crystal. 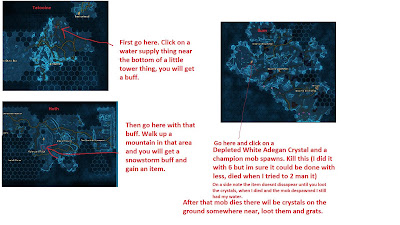 Here’s a video to help you even further: