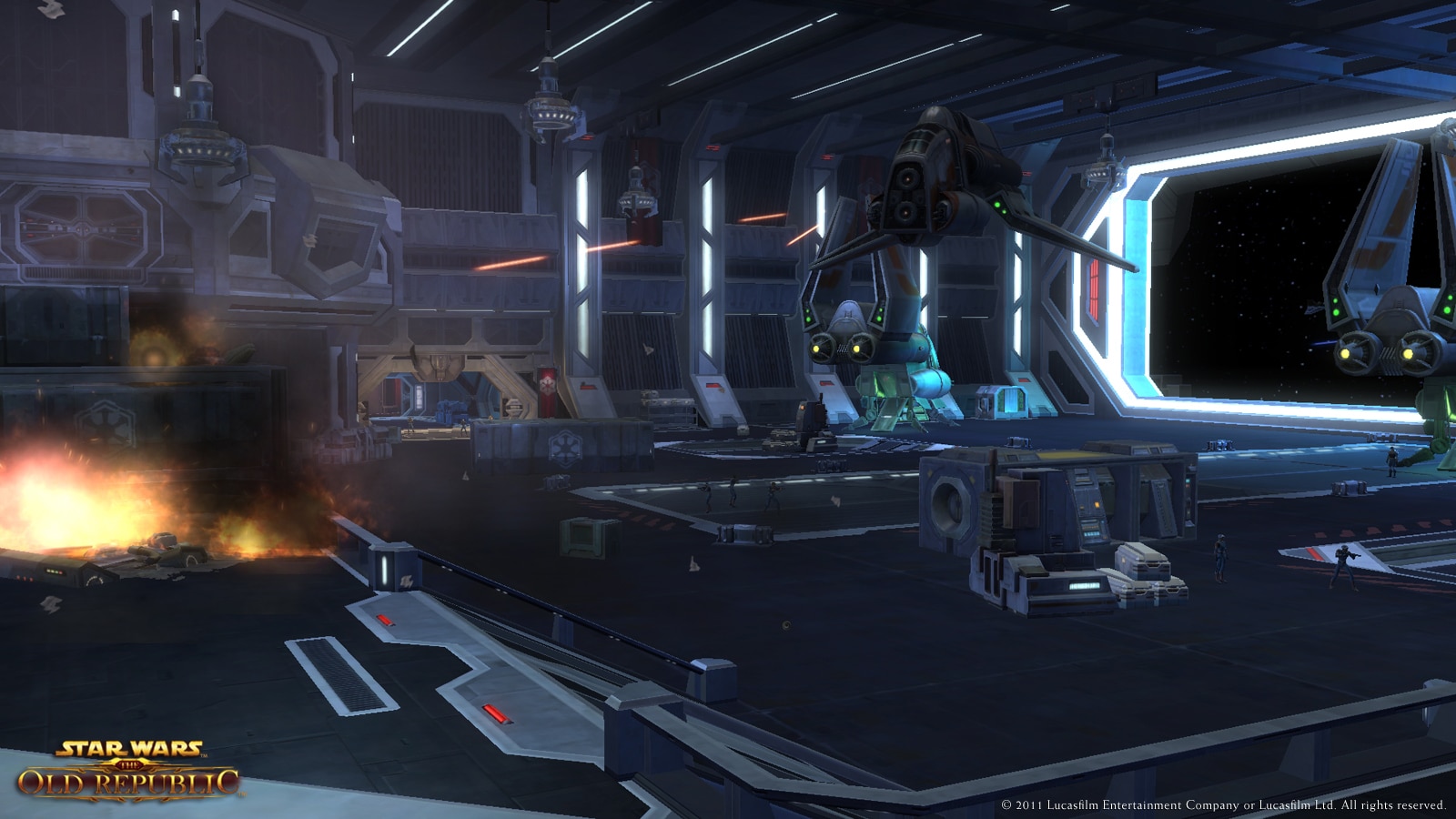 The Black Talon is the first Empire flashpoint you’ll encounter and it has the longest dialogue chain of any instance in the game. Since this is your first flashpoint, you’ll find it to be very easy but after your character reaches level 50, you can return and run this instance again in Hard Mode for a real challenge. For the first run, you’ll need to find a partner that you can work well with because it requires at least two people.

Black Talon has a lot of cutscenes scattered throughout the instance, which gives you a lot of social points. You can also gain more than 200 affection points if you take along your first companion and choose the right quotes. During this flashpoint, you’ll go up against 3 bosses and one bonus boss.

The first boss that you’ll encounter in this flashpoint is GXR-5 Sabotage Droid. He is a huge droid that will summon up three adds that are basically very small droids. Since they are so small and don’t attack, it can be tempting to ignore them but don’t. Use a ranged DPS to kill them before they get next to you because they will explode and do a lot of damage.

On a special note, there is a possibility that in place of the GXR-5 Sabotage Droid showing up as the first boss, you could encounter three weaker NPC’s along with a chest containing a blue rare item if you chose to not kill the captain of the ship.

Commander Ghuili is a melee boss who only has one thing to be aware of. He will drop bombs that will do a lot of AoE damage even before they explode. However, as long as you pay attention, you can avoid these by simply staying away from them. You also want to keep the commander moving around as much as you can.

The bonus boss is actually a large robot droid but he is not as big as the first boss. Cut off his LoS while holding aggro on this boss and he will follow you around but he cannot attack. This makes him a pretty easy target.

The third and final boss is Yadira Ban. She is a Jedi padawan and she has mainly melee attacks. One of her abilities is very similar to that of a Jedi knight or a Sith warrior, so you do need to focus on what you’re doing or she will knock out your tank with just three or four hits. As long as you stay focused you can take her down rather quickly.

After beating Yadira Ban your potential item drops will include the Black Talon Deadeye’s Extermintor, Warmonger’s Saberstaff and the Lightsaber of Vengeful Mastery.

This is a very easy instance but you have to remember this is the first flashpoint that you’ll encounter. This one is mostly meant to help you get a feel for these instances. This way, you’ll know what to expect when you do get into some of the tougher battles later in the game.