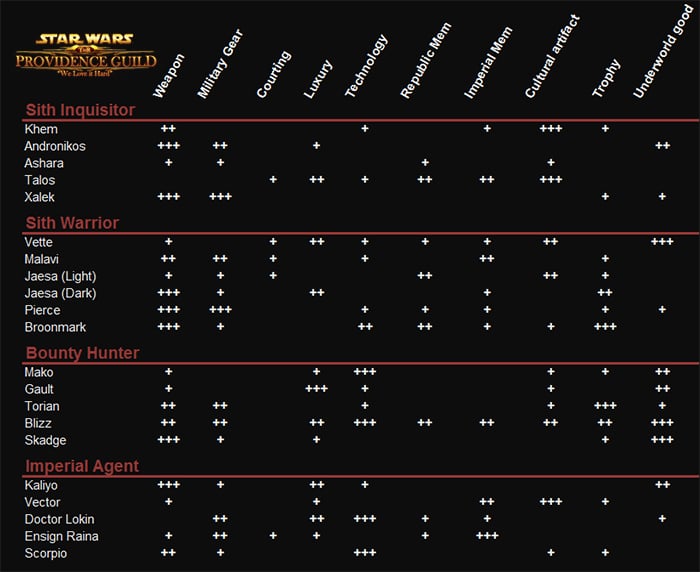 The most common way to gain (or lose!) affection with companions is to have them with you during cut scenes, or speak with them directly when they offer you missions in cantinas or your ship. The base affection gain for a dialogue option they approve of is +15, and the base loss for one they disapprove of is -1. Those values are modified by a multiplier that reflects how late in the storyline the companion joined up with you. Less commonly, there will be choices they strongly approve of, which have a base +40 gain, or strongly disapprove of, for a base loss of -30. In very rare cases there will be dialogue options that give much larger gains (usually restricted to romances, but sometimes also available during companion quests). The largest I’ve seen was +550, during a ship dialogue with the 4th Sith Inquisitor companion.

Gift affection is slightly more complicated. There are five ranks of gifts, and within each rank there are three qualities (green, blue, purple) and ten categories (Weapons, Trophies, etc.). The most counter-intuitive aspect is the ranks. They correspond to five “tiers” of companion affection, which are 0-2000, 2001-4000, etc. up to 10000 max. It is always best to give your companion a gift of a rank that corresponds to their current affection tier, because gifts of a lower rank get a severe affection penalty: if a gift is one rank lower, it gets a 0.5 affection gain multiplier, and if it’s two ranks lower, the multiplier is 0.2. It goes down from there, and eventually you will get 0 affection from giving them a gift that is “too cheap”. (This seems to apply only to green quality gifts. Blues and purples always give some affection, even if it’s a very small amount.) Conversely, giving gifts that are “too expensive” (of a higher rank than the companion’s affection tier) wastes affection, because you get only slightly more than the base value; this means you would’ve been better off holding on to the gift until their affection reached the appropriate tier.

Gift categories are a reflection of the companion’s specific preferences. Military companions often like Weapons and Military Gear; scientists and droids often like Technology; criminal types like Underworld Goods, etc. Again, We have a guide here what each companion wants. Note that there are four possible responses: High, Medium, Low, and Indifferent. For a rank 1 green gift given to a companion with less than 2000 affection, the gains will be +96, +54, +24, and +0 respectively. I take that to mean the “base” gain is +24 and the multipliers are 4, 2.25, 1, and 0 (I have not tested this with higher affection tiers). Not every companion has a High category, but most of them have at least one, and obviously you should give them gifts of that category whenever possible. There are different emotes for each interest level as well.

Quality is fairly self-explanatory because it corresponds to the same system as item valuation: purple is better than blue is better than green. I don’t have the exact multipliers.

Just for trivia’s sake, there actually are white companion gifts in the game, but they are extremely rare. I got one in the mail as a followup to a low-level quest on my Jedi Knight. My theory is that they were removed in one of the beta builds, but a few were missed here and there. AFAIK no vendors sell them. They give less affection than greens.