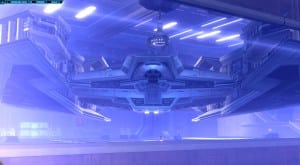 Where would a Star Wars game be without starships? This is one of the interesting features of SWTOR, although many agree that the space battles are lacking (hopefully that will be remedied in the future). Still, spaceships/player ships/starships are an amazing thing. This is a place to relax (gain rested), talk with your companions, travel to other words or even access your Cargo Hold. They will also be adding a Galactic Trade Network terminal to the starships. In the future, you will also be able to allow friends to visit your starship if they have their own already. So it’s no surprise then that one of the most common questions new players as is “How do I get my starship in SWTOR?” After this, the next question is how to get the upgrades for it to make it stronger in space battles. Here’s a guide to all of your questions about starships in SWTOR. First, you need to know that there is no particular level when you get your ship so trying to power level to that point to get it won’t work, at least not in the traditional sense. Actually, you get it after you complete the last class quest on your second planet. Usually this is around level 16 but on one character I leveled completely with another player, it took us a little longer (around level 18) to get to that point. If you level your character in PvP, you will not be able to get your ship unless you go back and do the class quests to the unlock point. Here are the quests for each class that will give you your starship. Planet: Dromund Kaas

Types of Starships Each class gets its own starship with unique name and appearance. Jedi Knight & Jedi Consular – Corellian Defender Smuggler – Corellian XS Stock Light Freighter Trooper – Rendili Hyperworks BT-7 Thunderclap Sith Warror & Sith Inquisitor – Fury-Class Imperial Interceptor Imperial Agent – X-70b-Phantom Prototype Bounty Hunter – D5-Mantis Starship Upgrades Now the next thing to know is that you can upgrade your ship by adding torpedoes, shields, weapons and rockets. These come in the form of mods and are sold by vendors, crafting or quest rewards. There are 5 grades of each item and the vendors sell grade (rank) 1, 3, and 5. Grades 2 and 4 can be obtain as quest rewards or by crafting.   Starship Upgrade Vendors: Republic Fleet – Captain Gek and S-4SO located at Galactic Trade Market area. Imperial Fleet – Ensign Brukes and S-1A0 All Starships have a Protocol Droid companion. After Day 1 or 2, he stops being cute and becomes utterly annoying. It grows on you though. This companion cannot fight for you but can do crew skills just like all of your other companions.