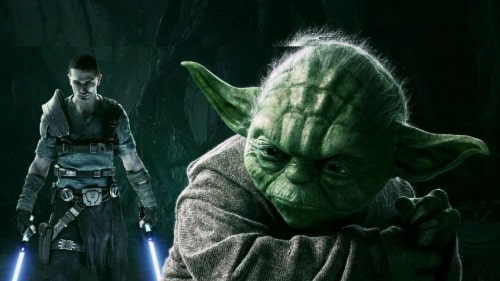 When The Force Unleashed 2 brought back the character that is Starkiller, most fans were confused, even more so when the story turned out to be quite short. This story was not always the plan and the original ideas for the game would have had new characters and a completely different story.

When a writer for Cinelinx had a conversation with the former LucasArts creative director, Haden Blackman, they became enlightened. The ending to the first Force Unleashed game, we saw Starkiller kill himself on Death Star during the battle against Darth Vader and Emperor Palpatine. His sacrifice allowed his friends to have a chance to escape and they went on to become the Rebellion as we know it today, until this was wiped out by the new canon. Once LucasArts let everyone know that Starkiller would be coming back for the sequel, many fans where very confused.

The game let fans have the idea that Starkiller clones were all around Darth Vader, just in case one went rogue, but it wasn’t clear if the character that you were playing was one of the clones or the real Starkiller. The tie-in novel does not help to clarify anything either and it actually uses not knowing what happened as its theme. Today, there are still fans who are debating what really happened.

So why did Starkiller return when the game leaves this so unclear? The answer is quite simple: Starkiller was not going to be the sequel’s main character to begin with. It was actually supposed to have been a new story altogether.

Blackman stated this about the initial work on the sequel:

“After TFU1, we weren’t officially working on TFU2 in any capacity, and most of my time was spent on the first incarnation of 1313 and exploring other Star Wars games (including a Battlefront reboot). However, I did carve out a small amount of time to generate some high-level concepts, none of which involved Starkiller. One idea was for a Yoda Unleashed game, which would have used Yoda as the main character and explored his past.”

Can you even start to think of a Yoda Unleashed game and how excitingly new that would be? It’s sad that it never happened, especially since the story would have been an untold one that is set in the past. Yoda did make an appearance in the last game, he was nowhere near the main focus. Blackman also stated this about other plans:

“Another would have told the story of the first Jedi and Sith (this was before anyone else had covered that ground, I believe). Still another was a Western-inspired story about a Jedi who had turned his back on the Order before the events of Episode III and is just trying to live a quiet, peaceful life when the Empire shows up at his door and he’s forced to kick all kinds of ass to protect his adopted home world.

“Maybe my favorite would have started in a mysterious prison that the Jedi used to secretly house Confederacy criminals; after Order 66, the prison is still running, with droids as guards and a single Jedi Warden who is cut off from the rest of the galaxy (I eventually repurposed this idea for Darth Vader & the Ghost Prison).”

All of these ideas sound good and they would be something that would let fans interact with a new aspect of the Star Wars universe that they haven’t experienced before. Blackman also talked about his goal in expanding it into a more open-world style:

“In all of these, I was thinking about the game in terms of a more open world, sandbox experience; there would be fewer environments, but they’d all be large, contiguous physics playgrounds. But again, I never developed any of these beyond a few pages of notes and a bit of concept art and reference imagery.”

This has been a great glance into what could have been with the games. What are your thoughts on the original ideas for the Force Unleashed 2? Let us know in the comments below.