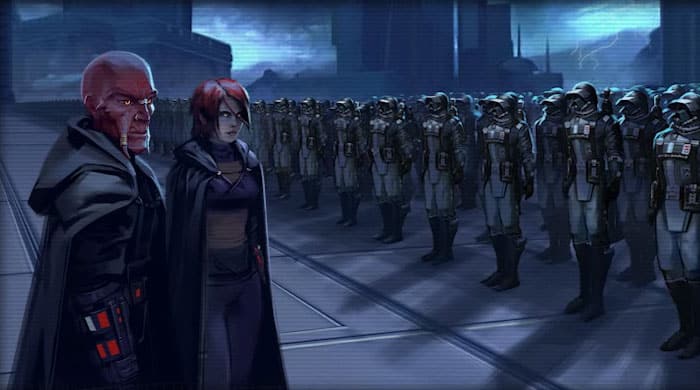 The Sith Emperor: 3.0 & What Came Before – When it comes to lore speculation, we love to hear what other fans have to say. Forum user Darth_Wicked has actually brought us some interesting insights into SWTOR lore and now he has some things to say about the Sith Emperor. In this post on the official forums, he talks about the current state of affairs concerning the “galaxy’s greatest villain”; What came before and what may be coming next.

He starts off with a nod to a Facebook post by Doug Bradley back in June of this year and then goes on to talk about the Emperor.

“Said to be immortal by many of his servants, the Emperor came to power shortly after Naga Sadow fled to exile in Yavin 4 with his Massassi Warriors, on the aftermath of the Old Empire’s defeat in the Great Hyperspace War. Leading the survivors to Dromund Kaas, shortly after the Republic chose to commit outright genocide on the people of Korriban, he promised his would be servants they would usher in a new era of conquest, might and further down the road, vengeance on the Republic.

As the centuries came to pass and the Emperor became the more secluded, many details surrounding him were lost to history and as a wise lady once said, history became legend and legend became myth.

Some myths may be harmless, like the one who claims the Emperor wreaked havoc on the weather in Dromund Kaas, the dark sky and clouds always crackling with lightning; Others, if accurate, may be considered more… Disturbing in their nature.

One of these myths claims the Emperor was born in the planet Medriaas, during a time where Marka Ragnos was the de facto leader of the Old Sith Empire, prior to Naga Sadow. Displaying great prowess in the Force from an early age, Tenebrae — as he was known back then — overthrew the then-ruling Sith Lord of Medriaas and was bestowed by Marka Ragnos the title of Lord Vitiatae.

What follows next is where myth ends… and horror begins:”

So if you want to read the rest of it for yourself,  just head on over and check out that original post. We think the good Darth makes some pretty good points.

Here are some other threads he has on lore theory and speculation: