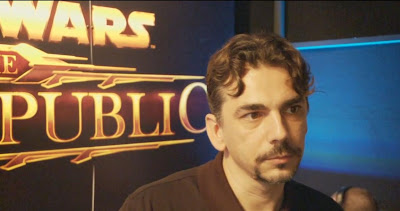 MMORPG.com has an interesting article interview with Emmanuel Lusinchi up that is really worth the read.

The Gamescom Q&A has a lot to offer- including info about guild ships and mini games and more. One might start to wonder what else we could possibly learn from these interviews that we don’t already know about SWTOR but usually there is a tidbit or two in each one that we find interesting. Those are the stories that we pass on to you here.

At first, Lusinchi tells us what he finds the most exciting aspect of the game and again, it comes back to the story, something that BioWare is pushing hard with this title:

“We wanted to make the game feel more like a story then just another level grinder, we wanted you to care about your character, so that you aren’t just playing to get more experience instead you are playing because of the feel that your character is immersed into the story. For example there is a Star Wars scroll that is constantly being updated with your personal story every time you finish a quest to help remind you what is going on, the idea is to get you so involved in the story that you would forget what level your character even was.”

Then, he goes on to talk about where he sees SWTOR in two years. And, another exciting tidbit is the mention of more mini games in SWTOR. Lusinchi says we won’t see more at launch but that there will definitely be more to come in the future of the game. He adds that there are a lot of future cool updates that he cannot talk about at this time but that he can say there will be more new cool mini games coming out in the future as well.

He also talks about character customization tweaks, milestones in the game development, and more. So check out the full interview for yourself over at MMORPG.com and tell us what you think.