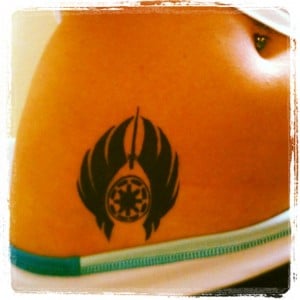 How much do you love your game? Star Wars fans are notorious for going to extremes to show their love and support for Star Wars and SWTOR is no exception. While some will call the game a failure, there are others who put their heart and soul into building and creating the game and still others who were just really big fans. Some loved the game so much they got SWTOR tattoos.

While a video game might not be permanent, a tattoo is so what will become of these people who love the game so much, they got a permanent reminder of it on their bodies?

Let’s explore this thought for a minute. We know the BioWare doctors got launch tattoos for SWTOR and there were many other members of the BioWare Austin team who did the same. They worked hard on this project and it’s not surprising that they might want to get some type of permanent reminder of what they devoted so much of their life to. No matter where the game goes, or even if those people are still working for BioWare, this will always be a part of their lives and something they will remember. I see no harm in that. It’s a great way to celebrate and commemorate a part of your life.

Then there are also the fans who got their own SWTOR tattoos. Some will judge and criticize but is it really anyone else’s business what kind of tattoo someone else gets? When I think of the video games I have played in the past, I can think of several that I might have gotten tattoos of. I don’t play those games anymore but I wouldn’t regret if I had a tattoo on my body today. Why?

When I think of those games I played, especially the MMOs, there is much more to it than just a game. When I remember certain characters I played or certain times in the game, it makes me think of other things in my life. The games serve as milestones for where I have been in my path. It’s more than a game- it’s a memory of my life and that is something special. Those memories don’t fade even if the games die off or you stop playing them.

Star Wars tattoos are incredibly popular so it’s no real surprise that SWTOR tattoos are out there as well.

Do you have a video game tattoo? Would you consider getting one?