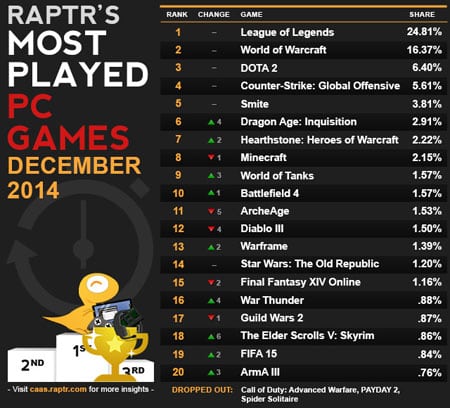 It’s that time again to take a look at Raptr’s Top 20 Rankings and where our beloved SWTOR placed at the end of last year.

According to the stats, Star Wars: The Old Republic close the year out as the 14th most played PC game. This isn’t the best ranking but it certainly beats out not being on the list at all. SWTOR released Shadow of Revan in December and the play time jumped by 33.35%. This is probably because of the release which gave Star Wars fans something new to be excited about!

LoL closed off the year in the number one spot, no big surprise there! The play time for LoL jumped by 30.09% in December. Other notable games in the rankings are WoW which placed second, Dragon Age: Inquisition placed 6th and raised in the charts by 4 spots! Overall, SWTOR finished out the year of 2014 at a great spot and we are excited to see how it places in the New Year.