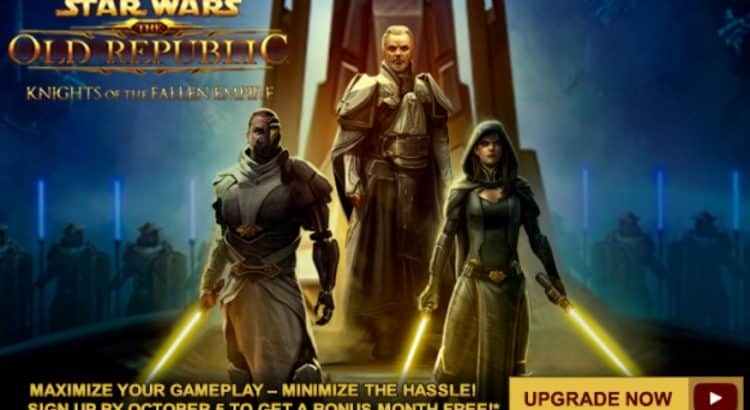 BioWare are sending out emails to former subscribers, offering a free month if you restart your subscription. People are now speculating that this means that KoTET won’t be released until December. Since they know players aren’t getting anything new until then, this is their “subscriber reward”.

The fine print reads: “THIS OFFER IS EXCLUSIVE TO NAMED RECIPIENT. A PURCHASE OF ANY RECURRING SUBSCRIPTION PACK BY OCTOBER 5 2016 AT 11:59PM PDT IS REQUIRED TO RECEIVE BONUS GAMETIME. BONUS GAME TIME AWARDED AT THE END OF THE FIRST PAID MONTH OR PAID SUBSCRIPTION PERIOD OR END OF THE FIRST PAID GAME TIME CARD PERIOD. OFFER MAY NOT BE SUBSTITUTED, EXCHANGED, SOLD OR REDEEMED FOR CASH OR OTHER GOODS OR SERVICES. MAY NOT BE COMBINED WITH ANY OTHER OFFER, GIFT CARD, REBATE OR DISCOUNT COUPON. VOID WHERE PROHIBITED, TAXED OR RESTRICTED BY LAW. LIMIT ONE OFFER PER ACCOUNT.”

so I’m guessing cancelling would void it, but it’s confusing as it says you have to buy a recurring subscription but it will award after a game card time period.