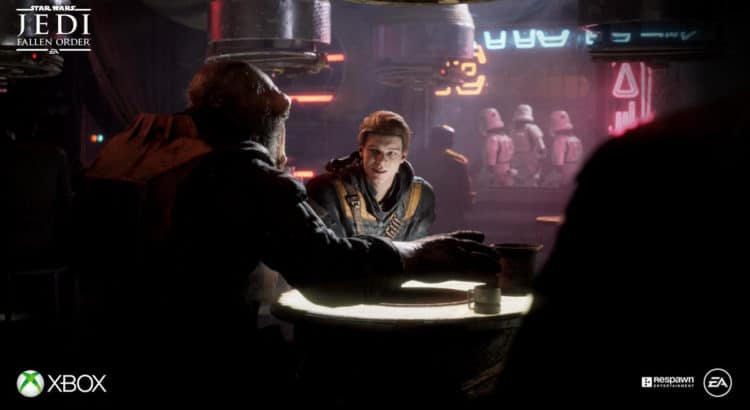 Why Fallen Order is Set Shortly After Revenge of the Sith

When asked about the timeline of the game, Contreras stated that the Respawn team decided to roll with a period just a few years past Revenge of the Sith because they found it to be one of the most intriguing ages in the Star Wars franchise. Aaron went on to say that due to the Empire having immense power throughout the galaxy during this time and Order 66 being in place, this period paved the way for a story based on an emerging hero – one that has to stay off the Empire’s radar and fighting to flee persecution.

Why Force Players to Utilize a Specific Character?

Aaron also shed a little light on why the team decided to make Fallen Order focus on the adventures of a specific character rather than give players the ability to form their own character identity. Contreras said that the development team came to the conclusion that players would have a more immersive and invested experience following the story of an outcast Jedi on the run as opposed to crafting their own character with no concrete identity.

While players will be in direct control of Cal Kestis throughout the gameplay of Star Wars Jedi: Fallen Order, they will also be accompanied by a small droid known as BD-1. The droid, which resembles Wall-E with robotic legs, is both a dear friend and great assistance to Cal, according to Contreras.

The droid is capable of helping Cal find hidden lore, replenish Cal’s health in times of need, opening doors to otherwise inaccessible areas within the game, and being able to investigate areas where Cal simply can’t fit.

Another talking point during STACK’s interview with Aaron focused on the enemies that players will encounter while playing Fallen Order. Contreras claims that while one of the fiercest foes Cal will have to face is, indeed, Second Sister – a powerful Inquisitor tasked by the Empire with eliminating Kestis, that players will also encounter Purge Troopers which have advanced training to deal with Force-wielders. This special class of trooper is a much bigger challenge than the standard stormtrooper that Star Wars fans are accustomed to, says Aaron.

You can read the full interview below:

With Star Wars Jedi: Fallen Order about to hit, STACK put some questions to developer Respawn’s narrative lead, Aaron Contreras, about what we should expect.
Star Wars Jedi: Fallen Order is set a few years after the events of Star Wars: Revenge of the Sith. Why this particular time period?This period in the Star Wars galaxy is what is deemed as the dark times. It’s before the rebellion even exists and is a period in time that we found extraordinarily interesting and ripe with storylines to explore. After Order 66, the Empire has absolute power throughout the galaxy, and that provided us the perfect setting to create a story that allows for an underdog hero to emerge. In Star Wars Jedi: Fallen Order, Cal is a former Padawan in hiding, someone who has been constantly on the run and trying to survive.
Players play as Cal Kestis. Why did the development team decide to have an established character rather than have players create their own?As we were building Star Wars Jedi: Fallen Order, we decided the best way for players to immerse themselves in the game is through a specific experience, in this case, the story of Cal Kestis. Cal is a brand-new Jedi who finds himself in this incredibly dangerous time for Force-sensitive people. You’re playing as someone who is an outcast and has to hide his true identity after the public has been told that the Jedi are the enemy. Cal really helps set the tone and motivation for the story we want to tell.
Cal will be joined by a companion droid – what can you tell us about BD-1?BD-1 is Cal’s best friend and is as useful as he is charming. In Star Wars Jedi: Fallen Order, BD-1’s utility is invaluable as he can help Cal in a variety of ways, including pointing out hidden lore titbits nearby, exploring areas where Cal can’t fit, slicing open doors to unlock new areas and even provide Cal a health stim to help him recover when he’s injured.

What kind of enemies will we be going up against beyond the standard stormtroopers?
The Second Sister is a lethal, sinister and menacing Inquisitor in constant pursuit of Cal. As an adept Force user, she’s certainly one to be feared. We’re also really excited about bringing Purge Troopers to Star Wars Jedi: Fallen Order, as well. We designed the Purge Trooper here at Respawn, but fans may have already noticed them in the Star Wars: Jedi Fallen Order – Dark Temple comics from Marvel. Purge Troopers are a sort of vanguard for the Inquisitors, who travel the galaxy to hunt down and chase fleeing Jedi for the Inquisitors. Their special training to fight against Force users will make them a serious threat compared to the average stormtrooper.
We know that we’ll be spending some time on the home planet of the Wookiees, Kashyyyk. Are there any other familiar planets that we’ll be able to visit?We’ve worked closely with Lucasfilm to bring a variety of planets both familiar and entirely new to Star Wars to the game, including Bracca, which was heavily featured in our reveal trailer, Dathomir, and Kashyyyk, but that’s all I can say for now!
From the extended gameplay demo, we see that Saw Gerrera will be a supporting character. Were there any characters in the Star Wars galaxy that the team at Respawn were especially looking forward to weaving into the story?We’re really excited to extend Saw Gerrera’s storyline in Star Wars Jedi: Fallen Order, but as for other characters in the Star Wars galaxy, you’ll have to wait and find out for yourself at launch!
We’ll be able to make some conversation decisions like in previous titles such as Star Wars: Knights of the Old Republic. Will players be able to make dark choices and play more like a Sith than a Jedi?No. We explore Cal’s traumatic past and complex relationship with the Force in Star Wars Jedi: Fallen Order but he’s ultimately a Jedi.
“We’ve worked really hard to make the combat in Star Wars Jedi: Fallen Order feel challenging, yet balanced…”
Were there any challenges creating close range combat with a weapon that can basically cut through anything?We’ve worked really hard to make the combat in Star Wars Jedi: Fallen Order feel challenging, yet balanced, and present a variety of enemies that offer unique strengths and weaknesses that require different strategies to defeat. While Cal wields a lightsaber, players will also have a variety of Force powers including push, pull and slow, which add a completely new layer of depth to combat. Players will also have the opportunity to unlock new skills and abilities during their playthrough, adding even more ways to approach a fight and turning Cal into Jedi to be reckoned with.
Are there any sneaky Easter Eggs that fans can look forward to?We have a few things in store that players and Star Wars fans might find exciting but they’ll have to play the game to discover them!

Star Wars Jedi: Fallen Order is a single-player, story-drive, lightsaber-and-force heavy game coming out on November 15th, 2019. The title will be available on PC as well as the Xbox One and PlayStation 4 platforms.

In an earnings call, EA also recently leaked that they are planning to release another new Star Wars game sometime in 2022. Details for this title will be made available here on SWTORstrategies.com as soon as we know more.