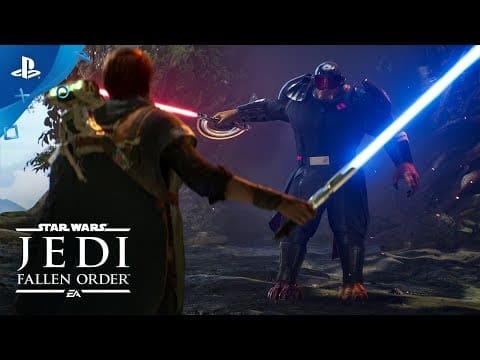 A single-player, narrative-based Star Wars title has been a rarity in the gaming industry for the better part of 10 years now. The last true story-drive game within the franchise prior to Star Wars Jedi: Fallen Order was Star Wars: The Force Unleashed II which made its debut in 2008.

The announcement of a new single-player title in the Star Wars universe was a surprise on its own. Combine that with the fact that it’s being published by none other than EA and you’d probably think the news were a farce had we not gotten a concrete launch date, trailers, and more at this point. Electronic Arts isn’t exactly known for having a great public image with gamers these days. Plus, they’re notorious for putting out nothing but multiplayer titles riddled with microtransactions (up until Battlefront 2, at least).

So, what made EA of all publishers decide to take up the mantle of making a shift away from the multiplayer realm and create a narrative-heavy Star Wars game? A recent interview with Respawn Entertainment developer, Stig Asmussen, conducted by StarWars.com provides a bit of insight for this exact question.

Asmussen stated in the interview that he had conveyed his desire of wanting to work on a single-player project from day one. Stig said he discussed it with Vince Zampella (the CEO of Respawn) from the get-go and Zampella told him they would definitely keep the idea on the table for when the right project came along.

Asmussen also shed some light on why the Respawn team decided to pursue the storyline they did with Star Wars Jedi: Fallen Order. Stig said, on behalf of the entire development team, that they were interested in crafting a narrative that felt authentic to the Star Wars universe and came across as natural as possible.

Regarding the time period Respawn selected for Fallen Order, Asmussen said that the team researched and explore multiple different eras before settling on the Order 66 era following Revenge of the Sith. Stig stated they wanted an era in which they could focus on a user of the Force with plenty of lightsaber-based combat. Respawn came to the conclusion that this was the ideal era in the Star Wars timeline for creating a completely new character that is being chased down, is forced to make a stand, and survive while the Empire is in hot pursuit of the protagonist.

The full interview is available below:

StarWars.com: What was behind the decision to make Star Wars Jedi: Fallen Order an entirely single-player, story-driven experience?
Stig Asmussen: Before I even came to Respawn, Vince [Zampella, Respawn CEO] and I were talking about doing a single-player, action-adventure game. ‘Let’s make sure we leave it all on the table, and make a good, meaty experience, and let it speak for itself.’ That’s what we wanted to make all along. And there was really never any pressure from any direction, because people knew this was the team constructed to build this type of game, and this is what we were going to succeed at.
StarWars.com: Early on, what were some of your goals for the original story you wanted to tell?

Stig Asmussen: It was pretty simple. We just wanted to make sure we told something that felt authentic to Star Wars, that brought something to the table, that expanded the lore, and that really translated to the experience in a relevant way to the things you’re doing. It was important for us to make an authentic Jedi story, and have it translate into growing and evolving from a Padawan into a Jedi Master. To all of us, it felt like it translated well to the game we were trying to make. So it was all really natural.

StarWars.com: How did you decide on the time period between Star Wars: Revenge of the Sith and Star Wars: A New Hope?
Stig Asmussen: We explored a lot of different eras. We knew ahead of time we wanted to make a game about a Force user with lightsaber combat. And we kind of tested that against different places that we could put it. But, honestly, this is an era that offers a lot of freedom. It’s perfect for making an action-adventure game. We could tell this new story of this new character who is being hunted, who has to fight back, and if he doesn’t, he’s going to get killed.
StarWars.com: Were there advantages to essentially starting from scratch with protagonist Cal Kestis?
Stig Asmussen: The upside to doing something completely new is, we can probably make something that plays nicely with our core game experience. But we also have to do all the world building, character building, and figure out the history and the background of all that kind of stuff. So there is a trade-off. I think the fact we did a little bit of both is probably the best path for us. It also provides a little bit of cred, because there is that Star Wars lore that everybody expects at least a little bit of.