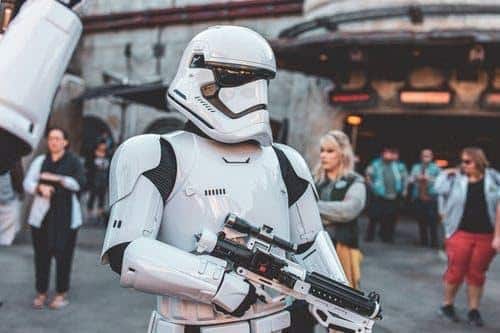 Since Star Wars: Episode IV was released in 1977, the film franchise has been a common household name and fan favourite ever since. If you’re looking for a gift for a Star Wars fan then your options are wide and varied, with a plethora of games, clothes and other merchandise to choose from. If you want to gift them something quirky that they’ll be using for years to come, why not buy them a Star Wars board game?

If you don’t know the faintest thing about board games or just can’t be bothered trawling through all the reviews on Amazon, you’ve come to the right place. Read on to find out the best 5 board games for Star Wars fanatics.

Monopoly has been one of the most popular board games in the world for much of its 85-year history. The game has been translated into nearly 50 languages, is played in 114 countries and has sold more than 275 million copies worldwide.

In order to keep things fresh, the board game has sought out a series of commercial partnerships in recent years, including a deal with the Star Wars franchise. In this fully licensed game, you can play on the Rebel or the Empire side as you attempt to dominate the universe.

Powerful Force cards will dramatically change your destiny as you travel around the board but use them to your advantage and you can be crowned winner by owning every planet in the galaxy.

Star Wars fans will love this game for its quirky take on the franchise and the fully licensed characters and iconography from the film series. What’s better is that the game doesn’t cost a fortune, with prices as low as $30 on Amazon.

Another game that is loved around the world by millions is Texas Hold ‘Em poker. The game isn’t just played by high-rolling professionals in glamorous casinos though, it is also regularly played every weekend, by friends and family throughout the world.

You could buy a customisable poker table which enables them to decorate the felt with their favourite character. Or even invest in a deck on custom cards, prices vary but if you look around on the internet you can find a good, professional deck of custom Star Wars cards for between $10 and $20. If you want to go one step further, you could even organise a themed Star Wars poker evening for your friend to indulge both of their passions.

If the recipient of your gift sees their love of Star Wars as more of an obsession than a hobby, this is the perfect gift for them.

Anyone who has fallen deeply in love with the Star Wars franchise knows the allure of collectibles and this game is just that. Published by Fantasy Flight Games this epic board game had a limited release in November 2016.

Since then there have been no more copies made so it has quickly become a valuable item to collectors. That said, it isn’t prohibitively expensive with copies going on a number of websites for as low as $30.

Whilst Star Wars: Destiny is more intense than your regular board game, it pales in significance to this absolute beast of a game. Rebellion is probably the most detailed and epic Star Wars board game on the market.

One player takes command of the Imperial forces and attempts to hunt down the other players hidden Rebel base. The game quickly becomes a game of politics and military tactics as the Rebels try to persuade as many planets as they can to hide them and help fight back against the Imperial forces.

Games regularly tend to last for three to four hours so make sure your recipient has plenty of time to spare before they sit down to play this game. The depth and immersive nature of this game do come at a price though, with copies going for around $75.

Regularly rated as the best Star Wars board game on the market by fans of the franchise, Imperial Assault is the ultimate gift for your Force loving friend or family member.

The game can be played in single player or by groups of up to five. Imperial Assault is a campaign style game of strategy that sees players take control of new Rebel characters as they embark on a series of missions in the Star Wars universe.

The game is as immersive as any and has a lot of cool features that will put a smile on any Star Wars fans face. There’s also a neat 1v1 skirmish mode that can be played when your recipient is short of time and wants some quick and fun action.

Again, it isn’t cheap coming in at $75 but it really is worth every penny when you consider just how good of a game it is.