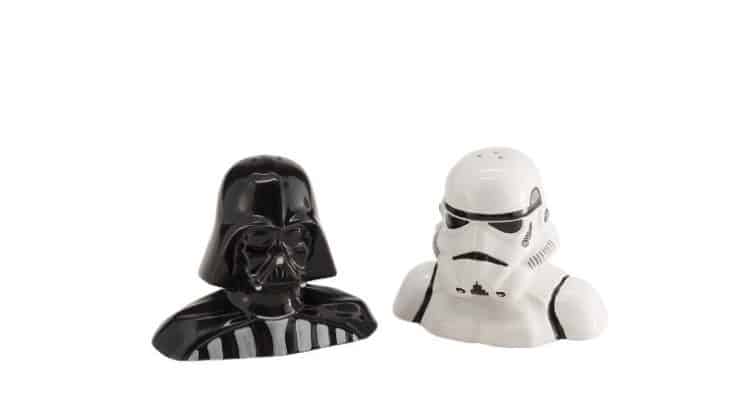 Can you believe that December is here already? The holiday season is upon us and if you haven’t already, it’s time to start shopping for the people on your holiday list. If you have Star Wars fans on your list (who doesn’t?) or if you’re building your own wish list for the holiday season, we have some really awesome ideas for you.

Here are some of my picks for the best gifts for Star Wars fans in 2017:

Death Star Waffle Maker – Seriously, what better way to start your day than with Death Star waffles? I have a BB-8 waffle maker myself and it’s so cool!

Star Wars Flatware Set – Now you can have the Force with you while you eat. From breakfast to snacks, to dinner, it’s all covered. Includes Luke Fork, Yoda Spoon, and Vader Knife. Just don’t put them in the dishwasher.

Star Wars Decorative Wall Clock Made From Used Vinyl Record – This is a great pick for the Star Wars fan who already has everything. It’s also great for an art fan.

Star Wars R2-D2 Stein – R2-D2 can join your drinking fun. This stein is high quality and can be used often for drinking, but also looks awesome as a collectible just sitting on a shelf.

Vandor 99063 Star Wars Darth Vader Ceramic Shot Glass – You can add to the Star Wars party with these Darth Vader shot glasses. Made of ceramic, not plastic. They’re high quality and look great.

Monopoly: Star Wars Edition – Just as it says, it’s Monopoly with a Star Wars theme. You just can’t get any better than that.

Star Wars Bluetooth Speaker – The Star Wars themed bluetooth speaker will let you play all of your favorite music from wherever you want.

LEGO Star Wars Snow Speeder – Nothing is quite as awesome as LEGO and Star Wars combined, right? Two of my biggest childhood loves together in one box.

Star War Series Bedding Sets – Climbing into bed has never been so exciting!

Vandor Star Wars Salt & Pepper Shakers – These are not your grandma’s salt and pepper shakers. These are sure to impress your guests, or just give you a fun way to spice up your meals!

Star Wars Patent Sweatshirt – A classic sweatshirt is always a winning gift. Your Star Wars fan can show their fandom wherever they go, while also keeping warm.

LEGO Watches Star Wars Darth Vader Kids Minifigure Light Up Alarm Clock – If you have to wake up early, at least you can do it with LEGO Star Wars.

Vandor Star Wars Death Star 18-Ounce Ceramic Oval Mug – Your Star Wars fan will love enjoy their coffee, cocoa, or whatever they like from this mug.

Star Wars Death Star USB Wall Charger – You know you always have to charge your phone. Now you can power it with the Death Star.

Star Wars Death Star Cutting Board – Bring your love of Star Wars to the kitchen with this awesome Death Star cutting board.

These are just a few of my favorite picks for Star Wars fan gifts, but there are so many more on Amazon, I couldn’t begin to list them all. Check it out yourself. Your purchases help support our site so we can keep bringing you really awesome Star Wars gaming news.