When ever BioWare send out a “fan Friday” update, we get to see talented artist showcasing the ( mostly ) amazing work they have posted on the official forums. Not all artist post there work on the forums, and it has been quite a while since BioWare’s last fan Friday. So we thought it was time to check out the art community.
This time we will take a look at the work made by Patrick Lambert. We rally love his 3D drawings, and the small stories he writes to each picture.

Remember to check out Patrick Lambert’s deviantart profile or his personal website for more amazing drawings, were he is creating every class of SW:TOR. 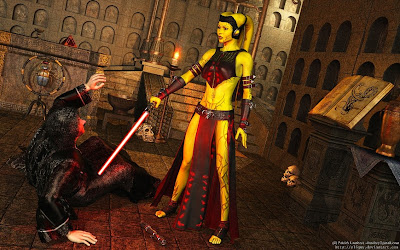 “Nooo!! *cough* Don’t do this! You aren’t ready yet, apprentice!”
“I am your apprentice no longer. On this day, I am Darth Kali. This temple shall now be your tomb.” 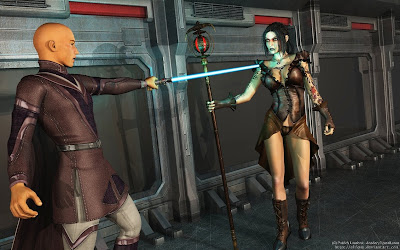 An overzealous Jedi attempts to stop a strange looking intruder on the outpost late at night. Unfortunately for him, he doesn’t realize that she is a powerful Sith Witch, and that he’s about to die. 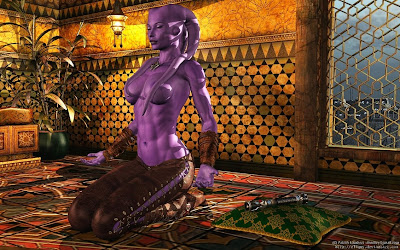 Darth Ali’ka, Dark Lady of the Sith and member of the Dark Council, meditates in her quarters of the Imperial Palace on Dromund Kaas after a long day spent interrogating Republic prisoners. In top shape physically, she enjoys getting her hands dirty by roughing up captives, often using brute force to do it. Her mind however is on the more unstable side, and many believe her to be borderline crazy. 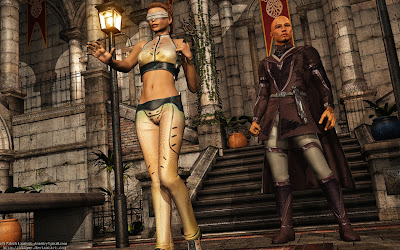 Jivala is a 22 years old Miraluka Jedi Consular. Ever since she was recruited as a Padawan, she has demonstrated unrivaled command of the Force. Mastering some of the most complex skills such as Force Sense and Battle Meditation in record time, she graduated to the rank of Jedi Consular, assigned by the High Council to some of the most important missions requiring her unique abilities, often managing to turn the tide of battles. As a blind species, she chooses to dress conservatively, wearing only a comfortable yet simple outfit, and a minimum amount of jewelery. She rarely even carries her lightsaber, preferring a Force focusing artifact, as her melee combat skills are sub-par, where she can instead easily defeat most opponents using just her Force powers.

Geroy is a 29 years old Jedi Knight who graduated at the same time as Jivala did. While he spent many more years as a Padawan, he has now developed impressive lightsaber melee skills. He met the young Miraluka while on a training mission, and was fascinated by her command over the Force. He has had a crush on her since the first time they met, and has always made it his task to protect her. While she always maintained that it was unnecessary, she took a liking to his presence and the two have worked as a team since they became full Jedi. Geroy always keeps his weapon handy, and has defeated many enemies with it.

On a small Mid Rim planet, the duo search an old abandoned palace where a smuggler is said to be hiding. Jivala reaches through the Force to locate their target, before the two go and extract him. An easy task for such a powerful team. 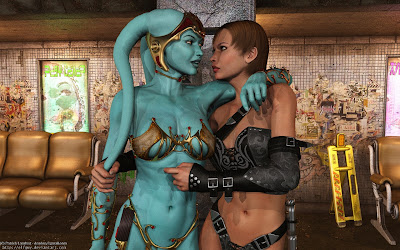 On the dirty back alleys of Dreshdae, late at night, Darth Dendory, a Twi’lek Inquisitor, and her apprentice, spend some time together. After so many tasks and missions together, they are linked by a powerful Force Bond that none of the petty thugs and homeless people still out on the street at this hour can understand. The two have become more than a master and an apprentice, but as parts of a whole. What one feels, senses, the other does also. They are certainly each unique, with one being more flirty, sarcastic and nonchalant, while the other is more tense and focused, but they live, breath, fight and love as a single, well trained entity. 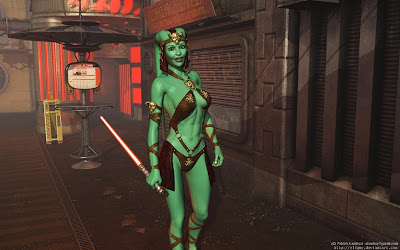 Valah out and about in the dangerous back alleys of Nar’Shaddaa. 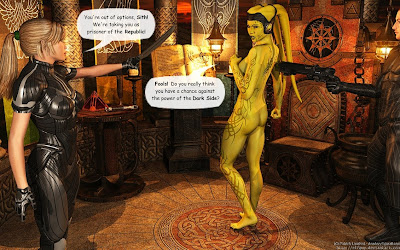 Kali, the Twi’lek apprentice to a powerful Dark Lord of the Sith, meditates in her private sanctuary, in a remote location on Korriban. She removes her outfit and weapon, to feel a direct connection to the Force. But a Republic commando learns of her hidden location, and two intrepid soldiers try and capture her, hoping to take advantage of the Twi’lek’s exposed situation, despite the refusal of their superior officers.

Unfortunately for the bold soldiers, even a Naked Sith has the power of the Dark Side at her command, and Kali simply laughs at their threats. She quickly dispatches the male soldier, using a powerful Force Push to send him crashing into a nearby cliff, where the native Korriban creatures make quick work of him.

Then, using Force Choke, she forces the young girl to drop her vibrosword, and then subdues her. She will face a much more terrible fate than her partner did, as Kali keeps her alive and unleashes Dark Side energies against her over the coming months, to break not only her body but her spirit, turning the Republic soldier into a willing servant of the Dark Side. 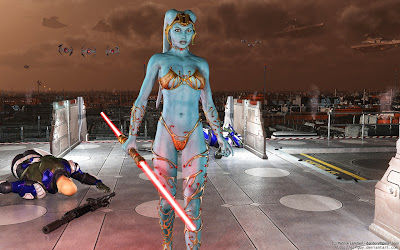 Darth Dendory leads the Sith invasion on this planet. 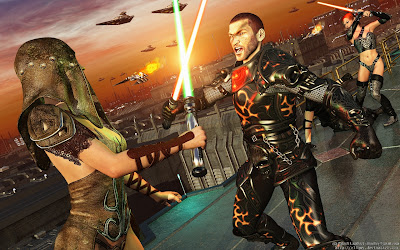 As the Sith Empire is invading the capital city of this remote world, a Jedi attempts a last ditch effort to stop the invaders, but the tide has already turned. 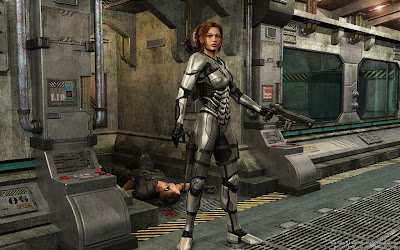 A Mandalorian girl works her way through some guards inside of a Republic outpost. 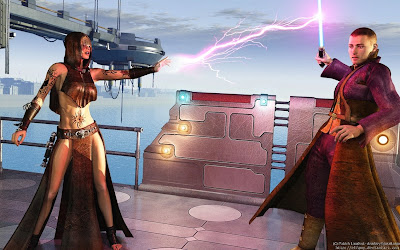 A Miraluka Sith Inquisitor about to kick a Jedi Knight’s butt. 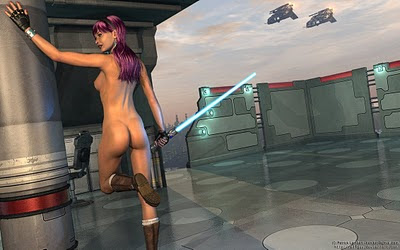 A young eccentric Jedi is getting ready for her training session. Would you fight her? Somehow I don’t think she’ll have any trouble kicking ass…

Dark Lord of the Sith 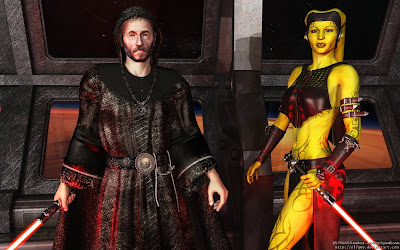 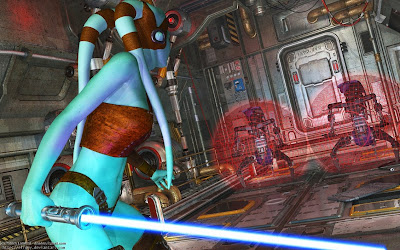 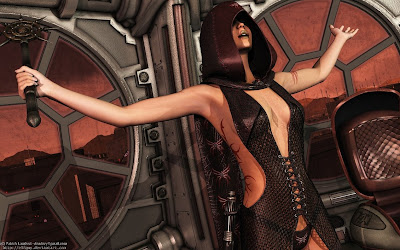 A Sith Sorceress doing an ancient ceremony to dig in the Force and give her visions of the future. 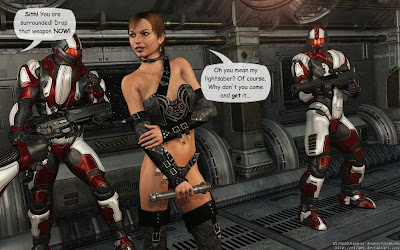 Raeliss, a young Sith apprentice, finds herself out numbered by Republic soldiers. Of course, that only means killing them will be more entertaining. 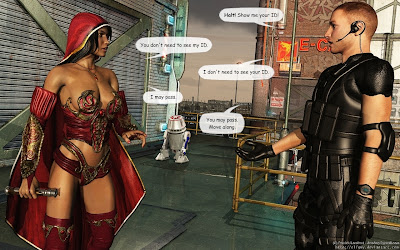 A Sith uses the Force to trick a local security officer. 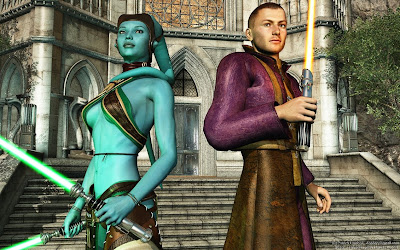 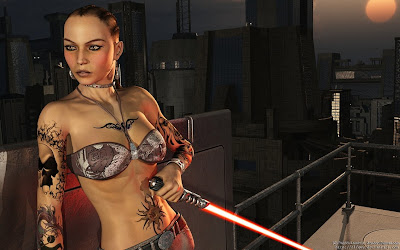 A young Sith girl overlooking the Refugee Sector of Nar Shadaa at night. Her mission is to infiltrate the apartment of a local crime lord and assassinate him. This will be an easy task for her…