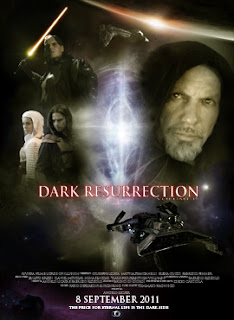 As fans of the medium, and of Star Wars – which seems to give birth to a disproportionate amount – sometimes we have a bit of fun with some fan films that fans have cobbled together in their bedrooms, enjoying them exactly for the short-term thrills they are. But then, there are some productions that don’t really seem to fit in with that categorisation of a “fan film”, because their production quality and general execution make an absolute mockery of most that has come before.

Italian film Dark Resurrection was one such production: released back in 2007 (and featured on this very site two years later), it ran circles around most other fan-made films that had captured our attentions up until that point.

And now, excitingly, we can bring you the follow-up, which is not, as expected Volume 2, but a prequel, entitled Volume 0. Originally conceived as a prologue to Vol 2, 0 was given the full treatment when the film-making team behind Dark Resurrection were struck by how well it worked in its own right:

“After months of post-production, we realised that the material deserved to be
properly developed as it tells interesting stories about the past of evil Lord
Sorran and the mythology of Eron; [the] fulcrum of the entire story.”

The plot reads as follows:

Master Sorran, is obsessed by his search for an ancient civilization which, according to legend, holds the secret of immortality. After many years he
lights upon the wreck of the civilisation’s most powerful starship: the Resurrection.

Sorran ignores the dangers and orders his crew to dock. The explorers and Sorran himself will face the mysteries of the Resurrection and the secret of the origins of the dark side.

As with Volume 1, 0 is made by a team of both highly skilled professionals and amateurs, behind and in front of the camera, and the production quality is just astonishing for this level of film-making. Just look at it…
Be sure to watch the film in full screen, HD.   A fantastic film that won’t disappoint you!