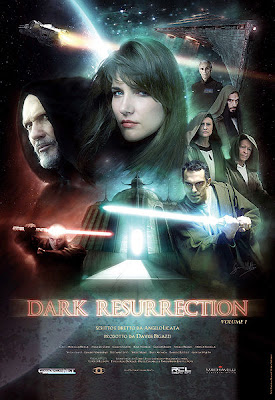 Dark Resurrection is an Italian Star Wars fanfilm (with english subtitles) written and directed by Angelo Licata and produced by Davide Bigazzi and Licata. It consists of two episodes, each 60 minutes long. The first episode was released in 2007 and the second episode is still in production.

Movie scenes were shot in Italy and further enhanced by special effects.
The story begins a few centuries after Episode VI, telling about a young Jedi apprentice who lives in a period of great changes in the balance of the force and galaxy.

Even if it has been realized with limited means and with a very low budget (approximately 7000 Euro) the LucasFilm itself, after having watched the trailer, defined it “Truly Amazing”.

Result of both digital technology and creator’s passion, this project has attracted the attention of the most important italian magazines (Ciak, Jack, XL, Panorama etc etc).

The cast is mainly composed by amateurs, but there are also several professionals who have been attracted by all the rumors generated by the trailer on the web. These professional actors decided to offer their collaboration for free. Between them, we recall: Sergio Muniz, Giorgia Wurth, Enzo Aronica, Riccardo Leto, Fabrizio Rizzolo. The narrating voice is from Claudio Sorrentino, the Italian voice of Mel Gibson and John Travolta.

Watch the full movie on Veoh

The National Premiere of Dark Resurrection Vol. 1 took place at the Ariston Theater in Sanremo, the 7th of June 2007.

The event has also been a celebration for the 30th Anniversary of Star Wars: the theater was full house with 1800 spectators, the 501st Legion – ITALICA GARRISON and many special guests (such as Fausto Brizzi, Adriano Pintaldi and Walter Vacchino) were present. The show was introduced by R2-D2 and C3-P0, hosted by Giorgia Wurth and Fabrizio Rizzolo and ended after the screening of the backstage with all the cast presented on the stage.