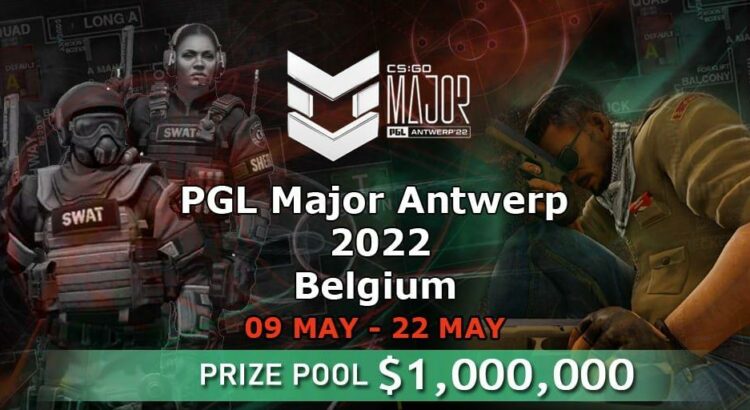 All participants of the first CS:GO Major of the season are determined. PGL Major Antwerp 2022 will take place in Belgium on May 9-22. Twenty-four teams will be competing for the title of the best one, dividing 1 000 000 dollars. What should viewers expect from the tournament?

Who are the favorites?

Due to the big number of participants, a few teams can claim the victory at once. Let’s stop at the three most obvious favorites:

Predictably, the reigning champion of the previous Major is listed among the main favorites. The team is in great shape before the tournament. Failure at the previous competitions should not raise doubts. NAVI will be highly motivated to defend their title and many will depend on the performance of particular players.

The star team is now leading the HLTV rating, so it has to be among the favorites of the Major. The team has gained a brilliant shape, having won two titles (the ESL one and the IEM one).

Last time, the team was one step away from the final, however, that result secured the team’s status as one of the best teams in the world. The transfer to the new organization solved the current problems and provided extra motivation. So it is worth waiting for Cloud9 to enter the list of contenders for the title.

Who can surprise us?

The teams, which can gain momentum at the tournament and surprise, might accompany the main favorites. We will highlight three teams, which have a chance to do this:

They opposed the team Natus Vincere in the final match at the previous Major. Now, the team lost its positions a bit, compared to that period. The players were not able to make it to the Legends Stage. However, it is worth expecting them to proceed to the next stage and G2 Esports might make a sensation.

The Danish team passed the qualification to the Major perfectly and had no losses. Having placed first in the qualifiers, the team demonstrated that it can surprise.

Another team from Denmark can be expected to show a good play. The team gained a good shape and has a winning streak of six matches with a high win rate.

How can the organizer involve more viewers?

PGL is seriously working on attracting new viewers. The tournament is hosted in Belgium and the Romanian organizer stated about the big CS:GO fan base here. Besides, there will be coronavirus limitations at the arena. It makes visiting the competition way easier for viewers. Many fans are missing CSGO events in the LAN format and want to visit the stadium in Antwerp.

What is the format of the Major?

As in the past, the Major is divided into three stages:

The second stage uses the same rules but the teams, which have proceeded to the Legends Stage directly, will enter the battle. The top eight will make it to the playoffs.

The last stage is called the Champions Stage and it is, actually, the playoffs. All matches are played in a bo3 format in the Single-Elimination bracket.

How is the prize pool distributed?

The prize money is divided in the following way:

Compared to the previous Major, the prize pool and payouts are twice lower.