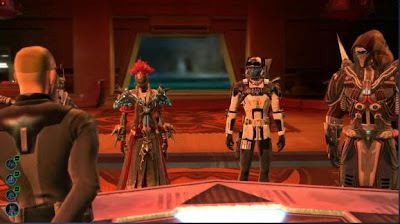 Bioware just released a new video about the “Mysteries of Knights of the Old Republic”. It shows a few new gameplay scenes as well, but is mostly about the history of Revan.

The Jedi Civil War left many unanswered questions. In the difficult days following the showdown between Darth Revan and Darth Malak, the Jedi Order struggled to survive, leaving little time for investigations. Redeemed as a Jedi, Revan traveled into deep space in search of a mysterious evil. We now know that the source of this evil was the reconstituted Sith Empire, but that solves only a portion of the mystery…

Personally I think this is going to be awsome. A final conclusion…maybe…to the story of Revan…something we’ve all wanted for since his disapperance in the second KoTOR. From a story stand point though it would be good to look back at the KoTOR’s for some advice.

In the KoTOR’s Revan was the Jedi war hero turned Sith Lord Conqueror. He was betrayed, Lost his memories and redeemed himself. The light side ending being canon from the Timeline Video Chronicling Revan and Malak. But it’s a combination of Dialog from G0-T0 and Kreia in KoTOR II and the actions taking by HK-47 and Bastla combined with information given in the Timeline trailers that brings up some interesting questions.

First of all once again some SPOILER ALERTS for those who haven’t played the KoTOR’s.
Revan remembered something terrible that loomed in the unknown reaches of space. A threat that only he could face and only those strong in the force could fight. Revan is “Reborn” some people thing this is a stretch but the Sith Emperor is 1000 years old or maybe older and with technology recoverd from the Star Forge combined with ancient sith knowledge, Remember the sith emeperor performed a ritual that has engufled a planet in Force lighting storms…and that was just an unforseen by product of the ritual.

You also have to look a Revan’s rap sheet. The timeline trailer said that Revan and Malak found the emperor and that he used Revan as a means to bring his plans to fruition in a more timely manner. But Revan left much of the Republic intact. During his campaign, before his betrayal, Revan left Key Republic planets, facilities, and Military instillations in tact when he was more than capable of destroying them. Why would the Sith Emperor allow him to do this and if Revan was a Sith why would he do it at all? Remeber the Jedi Master who makes the TIMELINE records is using bit of information lost centuries ago they may not be dead on.
To better supprot my opinions I think some words from Kreia, that at the time were know doubt tantalzing teasers for a plot in what many thought would be KoTOR III. Most of these you need to be friendly with Kreia to get so SPOLIER ALERT. They may not be word for word or in order by the way.

“No one truly knows were Revan came from. He was more adept in the force than any I had ever seen. Many wonder what lead Revan into the unknown reaches of space. Maybe it was the call of home.”

“Revan was a Sith. He lead the Forces called the Sith but are you sure. This is what the Jedi couldn’t understand…or maybe they didn’t want to accpet it. That maybe Revan never fell. Maybe he reconized a threat far greater than we could have known and saw that if challenged the Republic would fall. Perhaps Revan was never a Sith. Maybe Revan never truly fell. Maybe Revan was always just Revan”
“When a people have conflict and war thrust upon them they find themselves or they findthemselves lacking. Perhaps Revan knew this and sought to save the Republic the only way he could. By challenging them. To give them something to fight against. Revan could have overrun the Republic but he left key worlds, production centers, and military facilities untouched. It’s almost as if he wanted the Republic to be able to rebuild. To learn inorder to face what it too come.

There is also the action taking by Revan’s companions. Bastila supposdly followed Revan…so how did her child end up in the hands of the Jedi. HK-47 followed the Exile in KoTOR II so how did he find Revan. When did Revan build this facility and what was it for. What did Revan Remember. What did the Emperor say to him in those chambers all those years ago. Why was Revan able to leave so much of the Republic intact without the Emperor becoming involved…and was Malak’s betrayal more than it seemed. I have a few ideas buzzing in my head that could be possible outcomes for this but right know I would gladly play the game just to finish this story line.