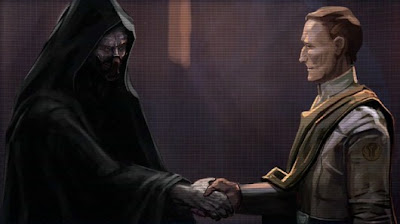 Daniel Erickson has given us more story with what is going on in the worlds we have yet to explore.

With the conquered world of Coruscant in the hands of the Empire, The Emperor has issued a treaty to The Republic.  This treaty is give peace to both sides but the Empire has clear advantage of power over the Republic they could win with enough time in my opinion, but I guess even evil needs to take a holiday.  It couldn’t be that peace is the only agenda that this treaty has to offer in my opinion.

Daniel Erickson also says that the attack on Coruscant took years to plan making me believe that this treaty is foot hold in Republic space without taking a step back.

The empire can play dirty without causing to much suspicion, but I’m not so sure that the Republic can do that and especially not without the help of the Jedi. I say this because the Jedi can’t really play that way, I mean they could but not very well and then the Empire might look like the victim.

He also mentions that the upcoming book Deceived with Darth Malgus explains more about how rotten the Sith really look.  And to top it all off the Emperor has never been seen by the Republic’s eye and was not at the treaty signing that he asked for.