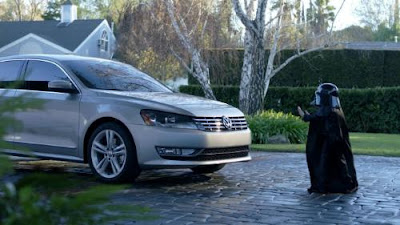 Now included in the history of Super Bowl advertising: “Star Wars.”
Lucasfilm, the production company founded by “Star Wars” creator George Lucas, has paired up with Volkswagen of America for a 30-second spot during the Super Bowl this Sunday.

For those that don’t care one lick about the Super Bowl, the commercials have always helped pass the time. While there have been off years, this years bout between the Packers and Steelers should give Volkswagen the opportunity to shine.

The spot portrays a small-size version of galactic villain, Darth Vader, using “the Force,” on a 2012 Volkswagen Passat, accompanied by the swelling music of the “Imperial March.””

Somehow there is also a baby involved. Coo.

According to Tim Ellis of Volkswagen of America, “We’ve partnered with Lucasfilm for the all-new Passat ad, leveraging the emotional heritage of both “Star Wars” and Volkswagen to create a memorable moment.”

The ad is part of Volkswagen’s campaign for the new Passat sedan, even though the car won’t be available until the fall.