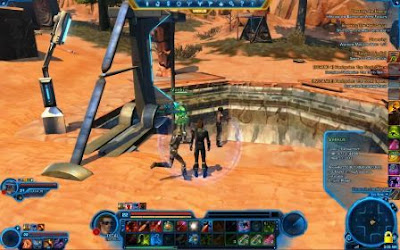 The one thing I found interesting in this flashpoint was how Bioware implemented crew skills just like they did in Bringing the Hammer Down: if you have bioanalysis in this one you can pick up special mushrooms and use them to summon a miniature version of the 2nd boss that’ll fight alongside you for a couple minutes or so. I hope all of the flashpoints have these crew skill aspects integrated because it’s pretty fun, especially when it’s your crew skill because then you feel all high and mighty!

This flashpoint was pretty disappointing to me, it was just so…bland. You can’t even blame it entirely on not being finished, as far as I could tell it was just missing some busy work quests. It had the potential to be a much more story driven instance but there’s no plot outside the initial convo and turn in.

I’m not generally one to spout doom and gloom but if anything put a damper on my enthusiasm it was definitely this flashpoint.

Some elements (such as the explosive satchels) are probably going to be better once the quests are implemented but the whole place really feels like a rush job. It’s just one long, poorly designed tunnel. There’s not even a way out of the instance. You can’t quick travel out of a flashpoint, we had to drop group and get ported out. Pretty shoddy design there.

The first boss was pretty unimaginative but I’m optimistic she’ll be fleshed out, again once the quests are in.

On the second boss it became really apparent just how bad the click boxes were. It was extremely difficult to click on the adds past the giant boss without some serious camera acrobatics.

The third boss was more annoying than anything else. He has a metric shit ton of health and his mechanics were unclear even after killing him.

(Mind you this is my take on it all having run it once and just starting to watch the video, more comments may follow)