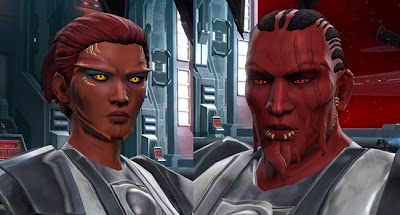 SWTOR drops us little seeds of the lore of the Sith. These little pieces of information drop us hints as to what happened to the Sith and it’s possible they might one day completely reveal this part of the story for us.
To understand, you have to know the real story breakdown of what happened to the Sith. They are not extinct as there are still some of them around. However, something did happen to them. Most of them seem to have been killed off and if there are some remaining, stasis may be the answer.
Loregy explains:
The other possibility is “stasis”, something Star Wars lore has loved for years from Han Solo all the way to Abeloth today. But carbonite is messy business, with issues such as hibernation sickness. We know it lasts for years, perhaps even centuries, but what about millennia? For the Sith purebloods to survive into legacy era lore, the Sith Empire would need to have acquired technology that could reliably hibernate an entire race for thousands of years. Enter Belsavis.
Possible mild spoilers after that point (but you are forewarned) and the writer makes some very good points about what may have happened to the Sith and how SWTOR might bring them back in the future while also explaining what happened to them.