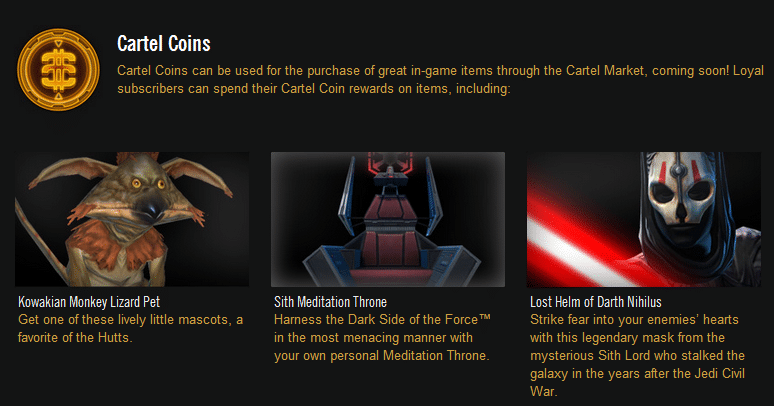 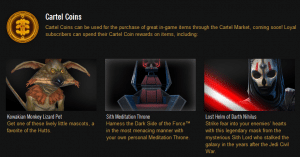 We’ve known for quite some time now that faithful SWTOR subscribers would receive some type of appreciate reward. But now we finally know what it is as Eric Musco confirmed in the forums with this post:

As some of you have already begun to figure out, every subscriber is receiving a bonus of 500 Cartel Coins. Some of you may not have gotten them yet but don’t worry, the process takes a few hours. All of you should be receiving your 500 coins today. As an additional tease, we have something coming to the Cartel Market later this month that is going to be super, super cheap and available for one day only! All I will say for now is hang on to 10 Cartel Coins and look for details soon™.

Hey! Pretty cool, right? He also mentions that you should hold on to at least 10 Cartel Coins and look for something special coming soon. So I’m guessing it’s going to be a special item that only Subscribers can get. What do you think it is?

What will you spend your 500cc on?

Edit: The big surprise was actually NOT for subs only. Musco was just trying to generate some buzz for the new announcement that came later today and included this bit of information:

So he meant since you’re getting 500cc anyway, why not hold on to at least 10 so you can get your title.