While not always a good thing, the statement is certainly true of Reddit. It definitely has the ability to create a large number of people centered on a single topic or cause. While Reddit haters will be quick to tell you how bad this is, there have been many, many times the community has stood together to do something great. No matter how big or how small, Redditors are waiting for the opportunity to put their collective minds together to do good. Such is the case of Brody Taylor.

The sophomore at Louisiana State University was feeling a bit lonely before finals with no one to play Star Wars: Battlefront with him and so he took out a personals ad in the LSU newspaper. 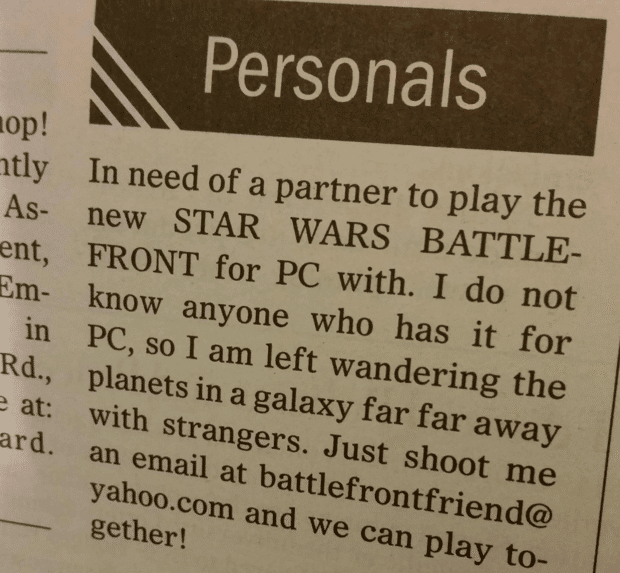 Little did he know, that little ad was about to blow up big time when someone saw it and posted it to Reddit. Taylor created an email specifically for the ad but didn’t except spectacular results. When he checked back in to the email, he had over 166 requests to play Battlefront, as well as some odd requests (one to join a dating site for gamers, for example).

He tells Inverse that he woke up today to 166 invitations to play Battlefront, but had no idea where they were coming from — at first.

“Some of the emails were sending me these links to Reddit and Imgur and I was like, ‘I don’t remember posting on Reddit, where are these coming from?’”

“So I clicked on the link and it took me to Imgur, and I saw that it had the picture of the ad. The picture on Imgur had almost a million views and had like 5,000 upvotes on Reddit,” he says.

Leave it to Reddit to make it happen, right? So if you’re feeling lonely, send a message out to Brody. Maybe if he’s not too busy, he’ll make time for some games with you.

Search your feelings, you know it to be true

To this very day I still don't know what the speci