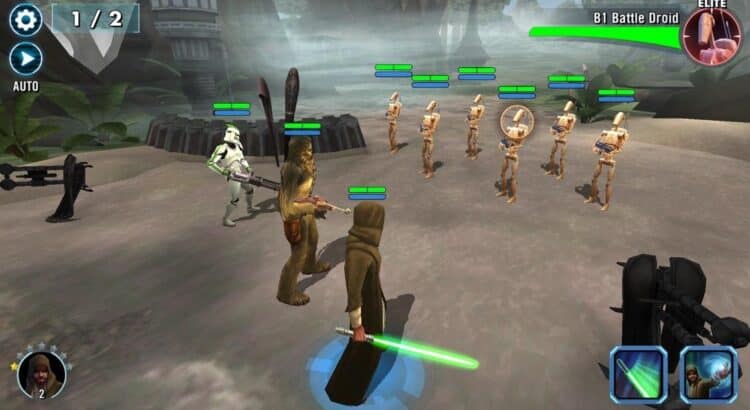 Star Wars: Galaxy of Heroes: How to get Yourself Playing and Knowing the Basics of the Game

In November of 2015, Electronic Arts launched Star Wars: Galaxy of Heroes, a mobile collectable role-playing game created by Capital Games and enjoyed by millions of Star Wars fans across the world.

Creating your own squad of four with the legendary Star Wars characters, both heroes and villains, is an important part of the free-to-play mobile game. To succeed against your opponents, you must use clever tactics and preparation. However, Electronic Arts continues to support the game with frequent updates such as bug patches and new content despite the game’s age, with an average of 3 million users logging on daily.

Mobile gaming is growing increasingly popular, with millions of people downloading games like Call of Duty, Fortnite, Minecraft and many more. It’s easy to see why the mobile gaming sector is booming and there are many reasons for that, however, online casino games like slots are taking full advantage of the boom in the gaming business, If you’re interested in playing online casino games and having the potential chance of winning money then you should visit here for the greatest online gaming casinos.

However, in this article we discuss the basics of how to get yourself into playing Star Wars: Galaxy of Hero’s,

Knowing the Basics – The tutorial makes this game appear to be a turn-based RPG at first sight. Even though the game borrows heavily from this genre, it focuses more on squad management than anything else. With the auto-battle system in place, you will be prompted to create teams that can accomplish stages quickly and efficiently without your constant supervision.

This game’s auto-battle option is critical, as completing the same stages over and over again is a necessary grind for developing a character and creating a strong squad. It’s because unlocking characters requires a particular number of pieces or (shards) which is the in-game term, and these shards can only be gained by finishing certain stages. While levelling up and completing various tasks, you’ll be able to unlock several characters for free, including some that are critical to your team’s success right from the start.

Improving your Main Squad – It’s difficult to allocate your resources because of the enormous quantity of characters within the game.  As a result, we advise you to seek out a 5-person team and put your efforts into building them up from the ground up. Basically, you’ll have to employ this squad to perform the daily tasks so they can level up and get stronger.

If you’re able to find a new character to join your squad, drop the old one and train the new one instead with your training droids and other things. Rather of spending time attempting to balance your new team, you can begin taking on more difficult assignments right away. When it comes to Galactic Wars, this is the finest strategy for staying competitive during your whole adventure.