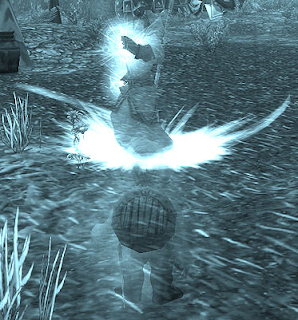 The death penalty of various MMORPGs is a topic of interest to many people – I’ve seen a number of thought provoking posts, and what is a more cheerful topic than death of your virtual avatar.

Yesterday Damien Schubert made a great post about this issue on the official Star Wars: the old republic forums.

In summary, the death penalty of a game is a powerful tool which strongly influences how much risk the players are willing to take. Theoretically you could make a game with permadeath, where when your character dies, you need to roll a new one. Obviously in such a game you would see people not even daring to attack to bunny without a group. Given how many fights you do in a MMORPG, even a 1 in 1000 chance to die would be far too dangerous. In games with corpse runs and lots of xp loss, people will play safe, and avoid getting too many monsters between them and their bind point, which makes dungeon design difficult. At the modern level of death penalty people are willing to be “heroic”, as failure isn’t too harshly punished. But you can’t possibly make the death penalty much lighter than now, because then people would just play foolhardy and not care about dying at all, which then becomes silly.

I see a lot of posts saying things like ‘death should have sting’, or ‘players should feel death’. We agree! However that being said, miscalibrating your death penalties can very insidiously destroy your game from the inside out.

We don’t want people to ignore the cost of death, but at the same time, we also don’t want players to avoid taking chances. We want them to take risks. We want them to try wacky new strategies, and exotic new builds. We want them to wonder if maybe they can solo that boss creature. In the name of creating a sense of fear and risk, overly harsh death penalties can inadvertently make people stop taking them.

To wit: too harsh death penalties can create grinding. If death sucks too much, players will stop taking on higher level creatures or even equal level creatures, and instead only take on creatures that are lower level than them – even though those creatures carry far less reward, the fact that they offer far less risk, might make them seem safer and more efficient to the player. Of course, now the player is fighting boring, ultimately non-threatening enemies, and is being bored to death.

Harsh death penalties can disincentivize grouping. I’m sure we’ve all been in some pretty bad groups in our MMO playing. How likely are you to group with a healer or tank that you don’t know if the penalty for failure is disastrous? How hard is it for new players to learn the skills they need to contribute to groups if other group members feel they can’t risk taking on a new guy?

Harsh drop penalties (i.e. you lose all your stuff when you die) can result in players leaving their best epix in the bank all the time. Sure, you’ll PROBABLY win fully decked out in ph4t purples, but what if you don’t? And just like that, your epic purple lightsaber is something you only ever equip at the bank… just in case.

Harsh death penalties can create flavor of the month builds. If death isn’t something disastrous, players will take risks and find new and exotic builds in the skill tree that continue to reinvent the game (and challenge the combat design team ). But if death is too harsh, more players will feel they have to go with a cookie-cutter template they found on a website, because it’s just not worth the risk if your wacky idea is wrong.

Harsh death penalties can ultimately force designers to make the game easier. If it takes 10 minutes to respawn after a fight or the dungeon becomes inaccessible, for example, it dramatically limits the ability for players to repeat the fight and learn it. This forces designers to make the fight easier so that a reasonable percentage of the players can succeed.

Does that mean we want the game to be a cakewalk? No, we want there to be tough fights. We want there to be complex fights that might take multiple tries to get right. We want to put in challenges for groups of players that require good tactics, good teamwork and flawless execution to pull off. But I would seperate the idea of ‘challenge’ and ‘punishment’. I would rather our challenges be gated by whether or not you have the skill, the gear, and the teamwork to succeed than whether or not you have the credits and/or time to wait out the forced downtime in between, you know, the fun part.

Damien Schuberts know what he is talking about as he previously worked on Ultima Online and Shadowbane. You can jump into the discussion on the official forums right here, and be sure to let us know what you think.