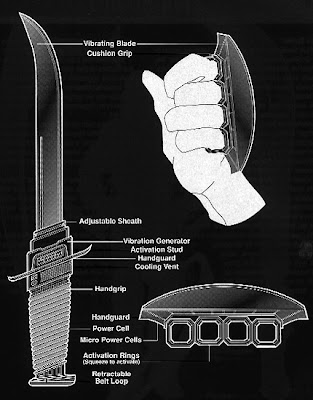 Vibroblades are the galaxy’s main cutting weapon of choice. Though they come in many different shapes and sizes, ranging from knives to longer swords, vibroblades are all equipped with a compact ultrasonic generator in the hilt. This causes the blade to vibrate at enormous speeds, thus giving the weapon its name. Because of this ultrasonic vibration, even the slightest glancing blow become a gaping wound. It could be fitted with cortosis weave, allowing it to parry the blows of lightsabers and energy swords.

As it is quieter than a blaster, the vibroblade is popular among assassins, but it can also be easily carried as a secondary weapon for close-range fighting. In the past these weapons were often minted containing a weave of the rare material cortosis, which allowed blade to parry even lightsaber strikes, a property that made the vibroblade a weapon of choice among Sith assassins. However, this practice has been out of favour with commercial forges for some time, as various galactic conflicts have seen a decline in the numbers of Force users. 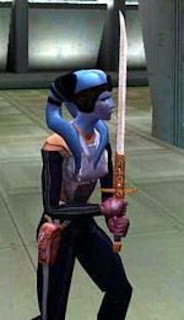 The cortosis weave became less common when the probability of fighting a lightsaber-wielding opponent decreased. By the time of the Galactic Civil War, knowledge of cortosis weave, as well as the mineral itself, was extremely rare.

Vibro-bladed weaponry was more common on isolated, less civilized worlds such as Tatooine. Jabba Desilijic Tiure’s personal Gamorrean guards were known to use vibro-axes, and his skiff crew also used pikes with vibro-bladed cutting edges. During his infiltration into Jabba’s palace, Lando Calrissian used a SoroSuub BD-1 Cutter vibro-ax as his primary weapon. Vibroblades were popular among criminals, resulting in them being banned on many worlds.

Clone Commandos had retractable Knuckle plate vibro blades.Vibroweapons were common during the Jedi Civil War and the surrounding times.