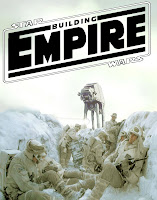 A fan documentary like no other on the planet, Jambe Davdar  brings us “Building  Empire” via YouTube in one huge, insightful project that is more than worth the time it takes to watch them.

The result of eight months of hard work, author Jambe Davdar ( or Jamie Benning which is his real name) brings us a collection of all the material from “Star Wars : The Empire Strikes Back” in one epic fan documentary that beats the documentary included in the Bluray boxed set by a longshot.

Davda’s labor of love gives us Star Wars fans an extensive look at the making of Episode V with deleted scenes and more background story than you’ve ever heard before. The documentary contains rare alternate takes, production audio, on-screen facts, cast and crew commentary, re-created scenes, storyboards and behind the scenes footage that you will not believe.

As you watch, on the top or bottom of the screen it’ll say where the video/audio comes from and adds other tips and tidbits about the movie and the making of the movie.

You may remember that we wrote about YouTube user ‘jambedavdar‘ before a few months back. Well, this is the same guy but not the same film. This documentary is on the second chapter of the original Star Wars Trilogy.

What better way to prepare for Star Wars: The Old Republic than by brushing up on your movie history a bit?