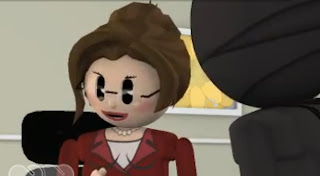 A few weeks back I posted the first episode of RussellW218’s SWTOR Forum walkthrough videos, which chronicled a mind-boggling real thread from the forums in which an obvious idiot aired his “opinions” on how to make SWTOR all sorts of awesome. Didn’t really paint him in the best light, but then the guy clearly didnt understand the fundamental nature of MMORPG gaming.

Anyway, here’s the second episode, animated in the same way using XtraNormal (despite the posters continued assertions that it sucks), in which a new forum user – Mrs. “”Paylin” – shares some of her own suggestions for The Old Republic that she feels will be absolutely earth-shattering.
Needless to say, it doesn’t quite work out that way.
Greatest line… “”Welcome to Star Wars, houses can now fly.””

Seriously, these forum moderators need knighthoods, one for the shit they have to put up with from morons trying to suggest “improvements” or weasel a Beta invite out of them, and secondly for the brilliant commitment to sarcasm they show in their responses.